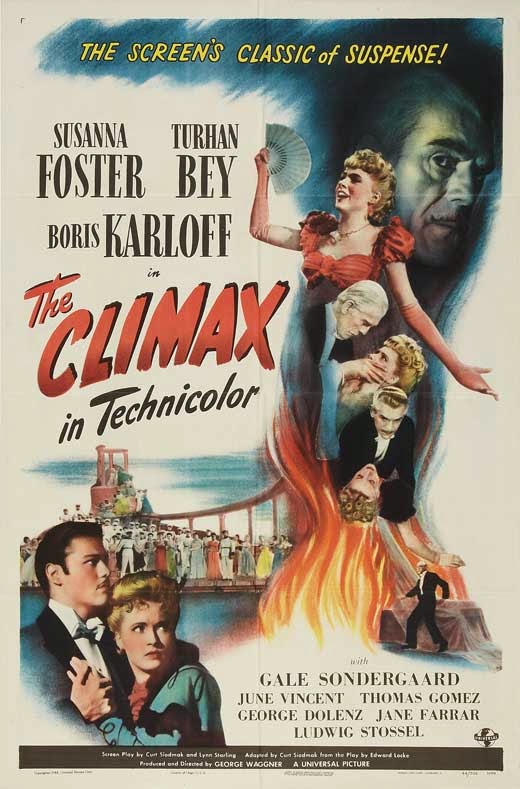 
As I mentioned at the end of my review of the 1943 PHANTOM OF THE OPERA, that film's success caused Universal Studios to consider a sequel. Instead, the studio dropped the idea of the Phantom and pursued a new story in an opera setting. The credits claim that THE CLIMAX is based on a play by Edmond Locke, but as Wikipedia asserts that Locke's play has little in common with the 1944 film, it's likely that the film's producer George Waggner-- who had produced PHANTOM but chose to produce and direct CLIMAX-- sought to come up with a pattern that would remind film-goers of the PHANTOM. Curiously, though, what we get has fewer overtones of the 1943 PHANTOM than it does of another horror-classic on which Waggner collaborated with CLIMAX's scripter Curt Siodmak: the 1941 THE WOLF MAN.

No comparisons between PHANTOM's plot-elements or WOLF MAN's theme will ennoble THE CLIMAX, which is fundamentally a very mediocre film. But it's fair to note that CLIMAX had greater potential than it used.

One important genre-notation to be made is that CLIMAX lacks even the muted horror elements of PHANTOM. Although Boris Karloff takes the place of Claude Rains in the role of plaguing Susanna Foster-- one of very few actors carried over from the 1943 film-- CLIMAX is closer to the pattern of the uncanny murder-mystery. In most horror-films, most of the audience's attention focuses on the twisted nature of the monster, mad scientist, etc. But though Karloff gets top billing, his character Doctor Hohner's only true function in the story is to be an obstacle to the singing career of Foster's diva-in-training Angela.

After some brief set-up scenes at the Vienna Royal Theater, the audience delves into a flashback in the mind of Hohner. Though all of Vienna remembers the mysterious disappearance of the famous diva Marcelina, only Hohner knows that he caused the disappearance. In the flashback we learn that Hohner loved Marcelina, but whatever may have passed between them meant far less to her than to him-- and far less than her operatic career. Hohner despises the singer's voice because she's chosen her career over him, so he kills her. Later the audience learns that he's kept her corpse concealed in a hidden room, though this is the least of Hohner's "bizarre crimes."

The arrival of Angela, a new understudy to the theater's established diva Jarmila, propels Hohner into a new obsession, for to the doctor Angela's voice sounds exactly like Marcelina's. When the diva Jarmila proves difficult, the theater-manager elevates Angela to the position of premiere singer. Hohner, who can't stand to think of another Marcelina giving her voice to the world, conceives a plan. Using his position as theater-physician, Hohner hypnotizes Angela so that she will lose her voice when she performs-- so that even if Karloff may never have played a Phantom of the Opera, he does fulfill the role of an "anti-Phantom."

Naturally both Angela and her supportive fiancee Franz are more than a little distressed by this malady.  Finally, after conferring with a sympathetic support character, Franz decides that the only way to cure Angela's little problem is the classic idea of "shock therapy," of forcing Angela into a situation that will force her to delve into the depths of her being and overcome her inhibitions, even though all are ignorant as to what caused them.

This form of "shock therapy" was also a part of scripter Siodmak's psychodrama in his earlier WOLF MAN. Intriguingly, though, in that film, the overbearing Sir John Talbot is proven wrong for trying this form of treatment on his son Larry.  But maybe good intentions make the difference, because Franz is proven right. All that Angela really needs is to be forced into giving a performance for a young royal, who is the current King of Italy (I think). This prompts Hohner to take new steps to prevent the return of Marcelina's voice, but by that time he's tipped his hand so that Franz and others have found him out. Hohner conveniently manages to off himself in the bower of his victim, while Angela goes on to a brilliant career.

The superficiality of the main characters-- Hohner, Angela, and Franz-- is not the main reason that CLIMAX is less than deeply involving.  The characters of Foster's character and her young swains in 1943's PHANTOM are no deeper than Angela and Franz, but PHANTOM's plot benefits from centering the action on the tragic monster. But Hohner is no tragic figure; he's a plot contrivance. The idea of an "anti-Phantom" whose only passion is to keep a great singer from her success just doesn't set up much of a story-dynamic. Even though the Phantom's motivations in the 1943 film are inconsistent, his obsession to Make Something Happen is much more dramatically interesting than Hohner's obsession to Keep Something from Happening.

I noted in my PHANTOM review that this Christine gets absolutely no tutelage from the masked man haunting the opera. Could it be that even though Foster was playing a fictional character, the performer herself might have been averse to playing a character whose musical brilliance was brought about by someone else? This is unfounded speculation that will never find any foundation, but I can't help but observe that Angela, bland stock-character though she is, is even more of an "anti-Trilby" than Foster's Christine. That is, whereas Christine in Leroux's PHANTOM and the titular heroine of DuMaurier's TRILBY are both female Galateas who are molded into excellence by male Pygmalions, both of Foster's characters owe nothing to the men who try to control them. Indeed, in THE CLIMAX Angela is really much more the narrative focus than Hohner, and the "climax" of the movie is that she triumphs over his attempted repression even without ever knowing what he did to her.  It's a theme that might well be embraced by a consciously feminist author-- though one would hope it might be used for a much better film than this one.
Posted by Gene Phillips at 1:46 PM
Email ThisBlogThis!Share to TwitterShare to FacebookShare to Pinterest
Labels: bizarre crimes (u), enthralling hypnotism and illusionism (u), perilous psychos (u), the uncanny