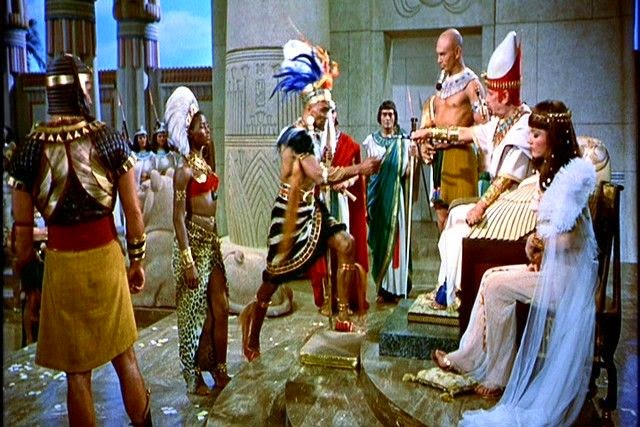 
THE TEN COMMANDMENTS was Cecil B, DeMille's final film, but for me, it's the least interesting of his crowd-pleasing epics. I think I enjoyed its spectacle when I saw the film in my youth, but other deMille films show a better balance between "putting things on display" and "making them come alive." In my re-viewing yesterday, the scene I liked best from a cinematic perspective was one toward the end, when the defeated Ramses takes his throne next to the throne of  his equally disconsolate queen Nefertiri, and the director skillfully "freezes" the actors so that they appear to become frozen in time. The implication is that the old ways of Pagan Egypt have been left behind by ever-progressing mankind, so that what was once a living culture is now no more than an archaeological curiosity.

And yet, for all the script's attempts to contrast the tyrannical, dynastic culture of Egypt with the latitudinarian, free-flowing culture of the Hebrews, Charlton Heston's Moses is not any more "alive" than Ramses or Nefertiri. This Moses is a Victorian painting come to life, and a Victorian prissiness overhangs even his attempts to make love to "bad woman" Nefertiri and "good woman" Sephora. DeMille, in my opinion, was at his best when he was playing off the supposed nobility of advanced civilization against the dark impulses of the chthonic world. This sometimes worked to the advantage of the latter, as in the Native American tear-jerker THE SQUAW MAN (DeMille's first film, and one he remade twice), but usually it eventuated in epics about good people temporarily seduced into doing bad things, as with my current favorite, SAMSON AND DELILIAH (his third-to-last film).


Moses, however, is not seriously tempted, as Samson is. Moses is raised as an Egyptian prince, but he's never truly a part of his culture. An inner sense of rectitude prevents him from falling into the tyranny of his adopted people. Sent to bend Ethiopia to the will of Egypt (seen above), Moses befriends the people and makes them into willing allies. Charged with forcing the Hebrew slaves to build the pyramids, Moses puts aside the harshness of his adoptive brother Ramses and opens the granaries of the priests to feed the slaves. The script makes much of the terrible things that will happen if Moses is exposed as a Hebrew to the Egyptian royals, but spiritually he's always Hebrew, and he's fundamentally incapable of being tempted into Egyptian ways-- which really aren't as deliciously sinful as they are in other films, particularly in the Rome of 1932's THE SIGN OF THE CROSS.

I like to think that I never bought into COMMANDMENTS' sociopolitical stance: that somehow, if everyone agreed to be ruled by the One True God, there would be no more tyranny. But the Ethiopian scene might offer a clue: in it, Heston's Moses is not so much an Egyptian-educated Hebrew but America's self-image of being the "ambassador to the world," who in theory can unify the world by showing good will to all peoples, so that they inevitably love not only the ambassador, but all aspects of the culture he represents.

The FX are still often admirable for the time-- the rivers turning to blood, the pillar of fire, and the parting of the Red Sea-- though even in my original viewing I realized that the camera had to cut away from the fight between Moses' serpent and the Egyptian wizard's snake because there were no FX capable of producing that illusion. It's interesting that even though the Egyptians worship many gods, their main representatives-- Ramses and Dathan, the Egyptian-ized Hebrew-- are skeptics who have no belief in either Moses' magic or that of the Egyptian priests. Perhaps the script wishes to imply that the modern movements of skepticism and atheism were far more a danger to the faithful among the audience than any challenge from Egypt's long-dead and nameless gods.

Heston's career was in a sense "made" by TEN COMMANDMENTS, but I'm not sure the film boosted the career of most of the rest of the cast, though it did end a "blacklist exile" for Edward G. Robinson. Anne Baxter, despite having to say lines like "Oh, Moses, Moses, you stubborn, splendid, adorable fool!," comes closer than any other actor to conveying the torments of a woman who loves a man but can't understand why he wants to go messing about with a bunch of Hebrews.
Posted by Gene Phillips at 12:09 PM
Email ThisBlogThis!Share to TwitterShare to FacebookShare to Pinterest
Labels: the marvelous