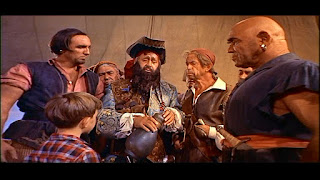 Though producer/director/writer Bert I. Gordon will forever be known for the "giant critter" films he made-- most famously, 1957's BEGINNING OF THE END-- Gordon's fantasy THE BOY AND THE PIRATES stands as his best work, whose merit easily eclipses most of the monster films and the slightly more adult fantasy he did as his follow-up to PIRATES, THE MAGIC SWORD.

In addition to directing PIRATES, Gordon also supplied the original story, crafted into a screenplay by two more practiced writers. It was rare for a children's film of the time to possess the structure of an irony-- the sort of story in which all moral compass seems in doubt-- but Gordon may have taken some inspiration from Lewis Carroll's Alice books. As Carroll's young protagonist falls asleep and dreams herself into a Wonderland full of creatures who celebrate pain and death as a rollicking good time, Gordon's kid-hero Jimmy Warren gets a taste of the distasteful realities behind his fantasy.

Jimmy is a modern 12-year-old living in a beachfront house in Massachsetts with his parents. His parents, only seen at the film's opening, are solid, square types who get on Jimmy's case to do his homework and clean up after himself, while the only peer we see is Kathy (Susan Gordon, Bert's daughter), a little girl roughly Jimmy's age. Jimmy fantasizes about the glorious life of being an 18th-century pirate, while Kathy sagely tells him that they weren't glorious figures, just a bunch of thieves and cutthroats. Then Jimmy stumbles across an antique bottle, washed ashore by the surf. He happens to be holding it when he wishes he could have lived the life of a pirate-- and whoosh! Jimmy finds himself on the deck of an 18th century ship, that of the pirate Blackbeard, whom Jimmy has idolized as a roguish hero.

Jimmy also encounters the inhabitant of the bottle, a tiny genie named Abu-- but Abu isn't one of the helpful sprites one could find in the Disney films of the period. Abu has been consigned to the confinement of the bottle for thousands of years, and the only way he can get free is to have someone take his place: a "role-exchange myth" rather like the one that Atlas tries to enforce upon Heracles in the Labor of the Hesperides. By some unjust cosmic law, anyone who holds the bottle takes the chance of being forced to change places with Abu, even if the holder is utterly unaware of the law's stipulations, and said holder can only avoid the role-exchange by putting the bottle right back where he got it in the first place. Abu only grants Jimmy's wish so that the youngster will be spirited away from the Massachusetts beach by Blackbeard, whose ship is busy fleeing from the English navy-- specifically, forces commanded by Lt. Maynard, historically destined to overtake and slay the pirate.

Jimmy soon finds out that there's nothing jolly or roguish about pirates: Blackbeard finds the boy aboard ship and almost tosses Jimmy overboard. Jimmy is saved by the fast talk of a sailor named Snipe, the only decent adult character in the story (aside from the pirates' victims, who only exist to be killed). Jimmy is spared as long as he pleases Blackbeard with his services as cabin boy, but the child is doomed to spent his young life in the magic bottle if he can't find a way to get the thing back to its original source. Additionally, life with the pirates offers peril at every turn: he witnesses the buccaneers ruthlessly pillage a ship and callously kill everyone aboard: a hard scene for kids to watch, even in G-rated form. Jimmy manages to rescue a young girl his own age from the ship-- Katrina, also played by Susan Gordon-- but though this gives him someone to talk to, it also makes his own situation aboard the ship more uncertain. Additionally, though the miniature genie doesn't seem to boast very grandiose powers, he's capable of a few tricks in order to counter any move Jimmy makes to get back to Massachusetts.

Jimmy does manage to triumph over both the pirates and the genie and get back to his own time, but it's something of a costly success (the viewer sees Snipe cut down by his lawless mates: no piratical loyalty here). Like Alice waking from her dark dream, Jimmy doesn't seem to fully know what's happened to him. But the viewer knows, and it's not just the sort of lesson that applies only to little boys glamorizing pirates. It has more to do with the main theme of the irony in all its works: of what T.S. Eliot called "the skull beneath the skin."

Posted by Gene Phillips at 11:00 AM
Email ThisBlogThis!Share to TwitterShare to FacebookShare to Pinterest
Labels: the marvelous