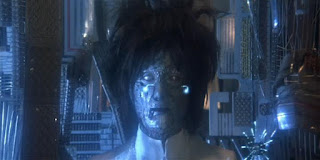 
The most interesting thing about watching the DVD of SUPERMAN III is listening to Ilya Salkind's reminiscences about the script treatment he submitted to Warner Brothers. Though I can see why the studio nixed it, the idea of having Superman deal with the advent of Brainiac and Supergirl had real possibilities for expanding the cinematic film-franchise. (I'm a little less sanguine about his notion of introducing Mister Mxyzptlk to the movies.) Salkind said WB didn't want the script because it was too "far-out," which probably meant, "too expensive," particularly for a franchise that might not make as much money in its third iteration. Salkind mentions the fact that his treatment included a little love-interest between the hero and his cousin, but he doesn't seem to apprehend that this would have been taboo to Americans doing a kid-focused property, even if the relationship never went beyond a brief flirtation. (Luke and Leia get away with it because no one, possibly not even George Lucas, suspected their relationship in the first movie.) I wouldn't have minded it, particularly because the comics themselves occasionally communicated a similar vibe. And certainly Brainiac-- who would have been responsible for Superman losing his sense of morality, as he does in the finished Number Three-- would certainly have been a villain to conjure with. (I suspect that he makes a covert appearance at the end of SUPERMAN III, when Annie Ross' character Vera-- seen above-- is briefly changed into a cyber-being to serve a super-computer.)

Though WB turned down the treatment, Salkind obviously gave a copy to David and Leslie Newman, the two credited writers of SUPERMAN III. Possibly they too were under an injunction to keep things more down-to-earth and thus less expensive, and I don't excoriate them for that. But I grade this film as poor because all the Newmans did was to recycle their one big contribution to the previous SUPERMAN films-- the conception of Superman's villains as a bunch of maladroit cornballs, like the ones from their stage musical (and later telefilm) of the superhero's career. Given the acrimonious separation of the Salkinds from Richard Donner, I'm not surprised that the producers couldn't get any help on the script from Donner's script consultant Tom Mankiewicz-- but did they really think that they just had to use the Newmans again, or that the writing-duo had contributed anything that had made the first two films successful? Then again, from what I've read, the Salkinds were highly susceptible to "star power." That's probably why they accepted the Newmans' script, and why they were so enthused when big movie-star Richard Pryor announced his desire to do a Superman film on the Johnny Carson show.

I'm not a big fan of Richard Pryor, so I won't dwell on my opinion that his humorous persona didn't work in the context of a big-budget Superman film. If I'm right about my "recycling" theory, then Pryor's Gus Norman is basically a retread of Otis from the other films: the innocent-seeming stooge who doesn't quite know what he's gotten into. Similarly, Robert Vaughan's billionaire-villain Ross Webster is another quirky mastermind like the Newmans' Luthor. The third member of the original trio, the sultry Miss Teschmacher, is split into two opposed characters in SUPERMAN III: Ross's sultry "psychic instructor" Lorelei and his sister Vera, who is an unattractive virago who doesn't like sex in any form. The biggest difference here is that Gus actually has some talent-- that of being an innate computer-wizard-- that Ross can use in his mad plans, which reference both the 1970s "oil crisis" and the growing power of computers in civilized life. Both of these "hot topics" of the period badly date the film today, while the first two in the series remain fresh and universal in their appeal. I will note that the Newmans finally provide a reasonably logical method for the villains to get ahold of kryptonite, but maybe this was an idea that just got left out of the 1978 film, when Luthor had to do the exact same thing.

In many respects the Newmans' script matches the talents of Richard Lester, who did his best work with zany comedies like HELP! and THE KNACK-- AND HOW TO GET IT. But the focus on comic bits-- even when Pryor's not around-- undermines any sense of drama in the proceedings. This includes the romance-scenes, in which Clark Kent re-connects with the girl he loved in Smallville, Lana Lang. I don't mind the script putting Lois Lane to one side (whatever the behind-the-scenes motivations). Lois' character-arc, after all, had been given a pretty strong conclusion in Number Two. But the script is heavy-handed about establishing that Lana likes Clark more than Superman, putting forth an over-obvious reversal of the Lois/Clark/Superman triangle. The romantic scenes are slow and ponderous, which surprised me given that the 1976 ROBIN AND MARIAN showed that Lester could direct romance ably.

The action, scoring and FX scenes are all creditable enough, but the only long scene that works well is the big fight scene. Superman-- corrupted by the film's version of "red kryptonite"-- splits into two beings: one his costumed, Kryptonian self (almost indistinguishable from Zod and his decadent partners), the other a super-powered version of Clark Kent, who is implicitly the moral side of the character, nurtured in the ethos of Earth. Lester handles these action-scenes as well as anything Donner did, though I didn't care for the fight's conclusion, in which Clark simply strangles his doppelganger to death. Similarly, the concluding battle between the hero and Gus's super-computer is badly paced, with the computer ratcheting itself up to self-awareness abruptly. A slower metamorphosis, along the level of a film like COLOSSUS THE FORBIN PROJECT, would probably have made the last section more suspenseful.

Posted by Gene Phillips at 2:56 PM
Email ThisBlogThis!Share to TwitterShare to FacebookShare to Pinterest
Labels: combative adventures, the marvelous