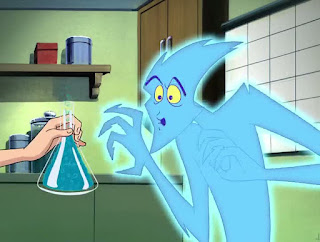 CYBER CHASE was the last of four Scooby-flicks produced for direct video under the theoretical aegis of Hanna-Barbera Studios. Warner Brothers had pretty much absorbed Hanna-Barbera by that time, which may be one reason that another WB property, Superman, gets two separate references. There's an attempt to update the Scooby Gang by having them encounter the world of video games, but it's still the same old schtick. This time there's a villain, the Phantom Virus, and instead of being a man in a mask, he's the cyber-creation of the mystery villain. He initially threatens his victims by coming into the human world and creating chaos, but when the Scoobies get involved, the Phantom sucks them into the video-terrain and imperils them with largely unimaginative dangers: a Roman gladiatorial arena, dinosaurs-- in other words, the same type of dangers Hanna-Barbera had been recycling since the 1960s. In similar fashion, the Phantom Virus is one of the most banal designs for a Scooby villain, as he resembles nothing more than a living lightning bolt.

The sole attraction of the 2001 DTV film is that while the heroes are inside the game, they encounter some of their old villains, whom the programmer created from their own recollections. The video doesn't do much with the idea, but at least it proves that recycling isn't always bad, since the 2004 live-action flick SCOOBY DOO 2 took the same idea and made it work pretty well.

Posted by Gene Phillips at 3:48 PM
Email ThisBlogThis!Share to TwitterShare to FacebookShare to Pinterest