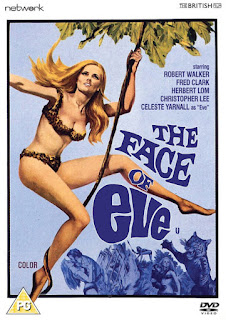 There's not much to recommend either of these two potboilers beyond the feminine charms of their protagonists.

EVE stars Celeste Yarnall as a blonde jungle-girl whose presence in the Amazon jungle is never very clearly explained. She rescues a treasure-hunter named Yates (Robert Walker Jr.) from some nasty tribesmen, but there's no instantaneous jungle-romance between the two of them: Yates learns that her name is Eve, thanks her, and goes back to civilization, and Eve seems content to stay in the jungle as before. Back in some Brazilian dive of a town, Yates makes contact with the rich man who's been funded the treasure-hunt, Colonel Stuart (Christopher Lee). Stuart has a new lead on the location of the treasure they're hunting, but for the first time, Yates meets Stuart's long-lost brunette granddaughter, whose name also happens to be Eve. It transpires that the brunette is a phony, merely posing as the grown-up Eve who was lost in the jungle, and that Phony Eve is really the wife of Stuart's rival Diego (Herbert Lom, playing a competitor slightly like Belloq in RAIDERS OF THE LOST ARK, but with none of the charm). Diego and his party, having ferreted out the info they wanted from Stuart, take off for their new destination. Yates pursues with a few helpers, manages to enlist Real Eve's help, and the good guys manage to get the treasure while the bad guys get dead.

Since Eve remains in the jungle even after becoming acquainted with her aged grandfather, I suspect that producer Harry Alan Towers, famous for his Fu Manchu films, had some hope of spinning the character off into a series. However, the action-scenes are humdrum, though Eve is at least a combative jungle-girl, unlike LUANA, which came about roughly at the same time. The actors-- Lom, Lee, and Yarnall-- are the film's only real charm, and Robert Walker Jr. does a credible job with his adventurous role, despite its not playing to his strengths. This was the second and last time co-director Jeremy Summers worked with Chris Lee following their collaboration on VENGEANCE OF FU MANCHU. 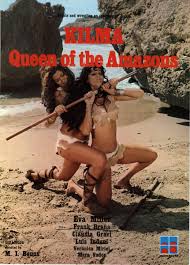 The Spanish-made KILMA, QUEEN OF THE AMAZONS does boast somewhat better stuntwork, as seen in the VHS art above, but the story is much more confusing. For many years an all-female (and all beautiful) cult of Amazons have reigned on a secluded Pacific island. Whereas Greek Amazons used to make temporary marriages with men, after which they kept only female babies to swell their ranks, the narrative claims that these Amazons have long, completely virginal lives thanks to an alien gem that they worship in their temple, and that, when they do need new recruits, they just steal girl babies from the nearby islands (though we don't see any children, just a lot of hot Spanish babes who don't look the least bit Polynesian).

A European ship comes near the island just as some of the crew, fancying a life of piracy, mutiny and take command. Ship's navigator Dan Robinson (like Robinson Crusoe, get it?) escapes in a boat and makes landfall on the island. He soon gets wind of the island's unusual inhabitants when he sees the ladies-- led by their high priestess Kilma (Eva Miller)-- take on an invading force of Polynesian men and kill all of the invaders. A little later Robinson encounters Kilma by herself, and she immediately tries to kill him. The only thing that saves the European's life is that just Kilma is about to knife the unconscious man, the priestess' horse tosses its head, as if to say, "No, don't do that." It doesn't exactly fill the viewer with confidence in Kilma's sagacity to see her take advice from her beast of burden, but she spares Robinson anyway, and eventually the two of them become more than friends.
Soon the mutineers arrive on the island, looking for provisions, and they learn that the Amazons have gemstones-- including one big one in their temple.

There are assorted action-scenes for the rest of the picture, a little more lively than those of EVE, but nothing overly memorable. At the climax, when the pirates invade the temple, the gem comes alive and blasts everything to hell-- after which the Amazons abandon their man-less customs and decide to start having sex again.

Though the myth-motif here is pretty well botched, it's evident that the cloistered gem represents the Amazons' cloistered sexuality, and that when the first is gone, the second has no reason for being. Still, director/co-writer Miguel Iglesias devotes so little time to the Amazons' religion that the viewer cannot know how aware he was of the symbolic potential.


Posted by Gene Phillips at 11:53 AM
Email ThisBlogThis!Share to TwitterShare to FacebookShare to Pinterest
Labels: combative adventures, exotic lands and customs (u), outre outfits (u), superlative skills (u), the marvelous, the uncanny