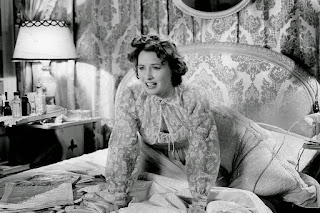 
Though I've claimed in some of my ARCHETYPAL ARCHIVE essays that uncanny narratives have a greater potential power for the mythic than naturalistic ones, the potential has to be realized with skill and control.

SORRY WRONG NUMBER and NIGHT WALKER are both stories in which the starring actress Barbara Stanwyck is terrorized, by naturalistic forces in one story and uncanny forces in the other. However, the script for SORRY, adapted by Lucille Fletcher from her own radio play, is a skillful psychological and sociological analysis of Stanwyck's character, while the script for WALKER is a sterile rehearsal of routines that were already stale when William Castle started to recycle them.

Leona Stevenson, the central character of SORRY, is a bedridden heiress. Prior to becoming an invalid, she romanced and married a poor man, Henry (Burt Lancaster), and essentially railroaded him into doing everything she wanted through a process of passive aggression.  Leona seems to have everything her own way, but one night, alone in her mansion, she picks up her phone and overhears a call involving a murder. She can't get the cops to investigate the mysterious call, but from her bed Leona tries to play detective through proxies. She eventually finds that the murder being discussed is intended to be her own, and that the scheme involves the husband she's manipulated over the years.

The script's heavy dependence on dialogue betrays its roots as a radio drama, but director Anatole Litvak gives everything a lush appearance to offset the sinister events, so that SORRY is easy to watch, even when Stanwyck isn't on screen. Given the film's memorable conclusion, one might theorize that Leona is being somewhat "punished" for being an assertive woman, which was indeed a frequent trope in films of the 1930s and 1940s. However, despite her "lionlike" name Leona is seen to be a moral coward who has not only beaten down her husband, resulting in his attempt to reclaim his manhood through criminal action, but she's also made herself too sick to resist the assassin who comes for her-- meaning that she's not really an assertive woman; just her own worst enemy. 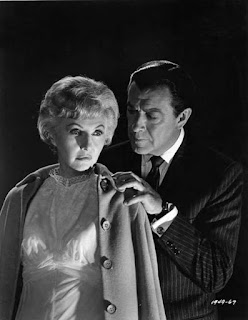 I have little to say about Castle's NIGHT WALKER. It appears on the tail-end of his notoriety as a horror-showman, and it seems to be the point where he lost his mojo. I wasn't a big fan of his early hits, like HOMICIDAL and HOUSE ON HAUNTED HILL, but they had a certain cachet, usually thanks to the performers involved. Some later works, like THE OLD DARK HOUSE and MISTER SARDONICUS, boast decent scripts as well as strong performances.

Not THE NIGHT WALKER, though. Stanwyck is Irene, a middle-aged woman married to a blind, significantly older man. The husband becomes jealous when Irene murmurs the name of a fantasized lover in her sleep, and he tries to find out if she has a real lover. Then there's a fire at the house, not long after Irene quarrels with her husband, and the old guy dies. After that, she begins seeing weird spectres, particularly of a man who's forcing her to marry him. Is she guilty of-- MURDER?

It's naturally a plot so ineptly disguised that even Shaggy could solve it with no input from Velma: a dastardly schemer is trying to drive poor Irene mad using people who wear obvious rubber masks to pose as her dream-spectres. I don't mind a "phantasmal figuration" tale that doesn't have much real mystery behind it: a little while back I gave a minor nod to SHE-WOLF OF LONDON, and that uncanny deception made no more sense than the one in NIGHT WALKER. But there were a couple of interesting psychological twists in SHE WOLF, and the bugaboo of "marital ambivalence" in WALKER lays a big fat goose-egg.

I'm amused by the fact that Irene never once thinks of the obvious: that someone may be messing with her mind. I'm sure it occurred to more than one audience-member, and the degree to which audiences could buy into this old-hat hocus pocus would have depended entirely on their impulse to be charitable. Given that WALKER flopped, I suspect that not too many people in 1964 felt like tossing their money away on this well-mounted folderol. For that matter, they could get better writing on TV for free, as THE ALFRED HITCHCOCK HOUR was still airing at the time.

For those who choose to study William Castle, NIGHT WALKER repeats what seems to be his favorite visual trope: floating heads, whether or not they're specifically horrific looking. I imagine Castle was attracted to this trope not because it held any great meaning for him, but because it was cheap. He was evidently depending on the status of the big-name actors to sell this flick, and WALKER does have the distinction of being (1) Stanwyck's last feature film, and (2) her last acting-job with former husband Robert Taylor. Happily, Stanwyck found superior fare later on in the burgeoning growth of the made-for-TV movie, particularly in simple but concise horror-flicks like THE HOUSE THAT WOULDN'T DIE.

Posted by Gene Phillips at 2:19 PM
Email ThisBlogThis!Share to TwitterShare to FacebookShare to Pinterest
Labels: phantasmal figurations (u), the naturalistic, the uncanny