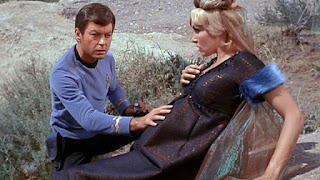 I don't imagine "Friday's Child" usually ranks on any Trekker's list of favorite episodes, but though it's not one of the better episodes, it benefits from a simple, uncomplicated script by D.C. Fontana. "Child" is basically another story where the representatives of the Federation get involved in local politics for the long-term betterment of native people-- though once again, the proximate goal has to do with gaining mineral rights.

Kirk and his two wingmen visit the world of the Capellans, a humanoid species whose males tend to grow about seven feet tall. (The only native woman seen for a substantial amount of time is 5'11'' Julie Newmar.) The Federation wants mineral rights on Capella, as do the Klingons, and Kirk must deal with Kras, an agent sent to compete over said rights. But the Capellans are the primary menace, for they are a fierce people who believe in the archaic warrior-ethic that both Earth and Vulcan have long renounced. Kirk and Co have their negotiations interrupted when the old leader, with whom the Federation was dealing, is killed in a coup by a Klingon partisan, Maab. Once the fighting is done, Maab has the authority to decide between the offworlders' offers, but first he has to take care of old business: assassinating Eleen, the old leader's wife (Newmar), and her unborn child. Kirk and Co. object to this barbarism, rescue Eleen (much against her will), and head for the hills. The rest of the story is largely a long chase-scene, though it benefits from the consistent depiction of shifting loyalties and of the Capellans' own warrior-ethic. The story's humorous conclusion suggests that Eleen's child, named for two of the offworlders that helped him survive, will be the gateway that gives the Federation a toehold with the natives-- sort of the science-fiction version of all the "Douglas McArthur babies" named in the aftermath of World War II. 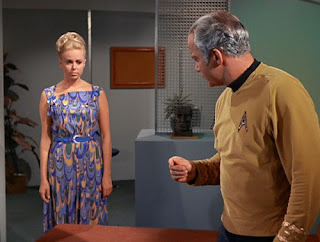 "The Deadly Years" was no favorite of mine, and I'd largely remembered it as just a sci-fi excuse for the regular actors to put on old-age makeup and imagine their youthful characters as "grumpy old men." But it does go deeper than that, and makes a better drama than "Friday's Child"-- perhaps because the drama inheres not so much in the regular actors, but in the responses of those around them.

A landing-party consisting mostly of the usual suspects-- Kirk, Spock, McCoy, and Scott, with newbie Chekhov and a female "redshirt"-- descends to suss out what's happened to a scientific research station on Gamma Hydra V. It's revealed that a foreign radiation has caused all three researchers to age rapidly beyond their years: one has already died, and the other two are hanging by a thread. The guys still don't seem to have learned anything about protecting themselves from foreign contagions from episodes as far back as THE NAKED TIME, and so the whole landing-party returns to the ship with zero cautionary actions. As it happens, though, only the ones who made landfall get the aging disease-- except for Chekhov, who seems immune. This twist in David Harmon's script adds a much-needed element of mystery to the tale, as well as allowing for a last-minute reversal of fortune for the afflicted crewmembers.

The Enterprise happens to be playing host to a Commodore named Stocker: Kirk's superior in rank, despite being more of a "desk officer." For reasons that aren't ever entirely clear, Stocker's burning to get to his new command post at Starbase 10, and when Kirk and the others starts showing signs of senility, Stocker uses their infirmity as an excuse to assume command of the ship and take it to the Starbase. This runs counter to Kirk's desire to stay near the planet that caused the illness, but Stocker succeeds, and then foolishly takes the ship on a straight-line course through the Romulan neutral zone. Though Stocker's actions are ultimately determined by the script's need for a "ticking clock," it's at least refreshing that Harmon doesn't make the character a simplistic martinet. He sincerely respects Kirk but thinks that the Starbase can do him and the others the most good. There's probably a subtext here regarding the superiority of "field warriors" to the desk-bound kind, but the narrative doesn't dwell on it.

More interesting, given Roddenberry's problematic status with American feminism, is the handling of another passenger, Janet Wallace. Wallace is a respected endocrinologist with whom Kirk had a relationship many years previous. The two broke up because both were primarily passionate about their careers, which is quite even-handed compared to some early depictions of "career women," such as Elizabeth Dehner. Wallace then implicitly "rebounded" to a scientist who shared her career goals, though he was much older than Kirk at the time of Wallace's marriage to him, and he's died by the time she takes passage on the Enterprise. There's no suggestion that Kirk and Wallace will revive old passions in the opening scenes, but once Kirk starts showing his advanced age, Wallace becomes a little more interested in him. Does she have a father-complex? Does she want an older husband whom she can control, as she could not control the young, vital Kirk? Or, being that she's a scientist who studies hormones, has she decided that she likes men whose hormonal surges are on the sedate side? Harmon's script happily does not nail her down, and thus she remains more interesting than a lot of Kirk's former flames. She made enough of an impression that her character was originally scripted to re-appear in the WRATH OF KHAN movie, only to be retooled into "Carol Marcus" for reasons that were not publicly revealed.
Posted by Gene Phillips at 3:22 PM
Email ThisBlogThis!Share to TwitterShare to FacebookShare to Pinterest