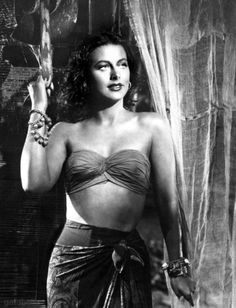 
Though politically I don't agree with the tendency of modern critics to cry "racism" at every negative portrait of a given ethnicity-- see THE BAD APPLE DEFENSE for details-- there's no question that WHITE CARGO is one of the most unadulterated racist films ever made.

To be sure, the story was a recrudescence of attitudes that went largely unquestioned at the time it was first written. CARGO began as a 1912 novel, "Hell's Pavement," by Ida Simonton. Thus the narrative, involving white traders presiding over an African rubber plantation, took place at a time when British imperialism was assumed to be the same as natural law. Roughly ten years later Leon Gordon allegedly ripped off aspects of the novel for his successful 1923 play "White Cargo." Simonton sued Gordon and the courts found in her favor, with the result that the credits for the Hollywood film acknowledge both novel and play while using the title of Gordon's play.

Perhaps in an attempt to distance the pro-imperialism sentiments of the narrative, the movie starts in the present, in a dialogue between traders on a 1942 rubber plantation. After a quick reference to current events-- the need to produce rubber to defeat the Japanese threat-- one character begins to reminisce about his experiences when he first came to the plantation in 1910. The main action then takes place in a flashback, with a brief return to 1942 after the story has been told.


The opening scenes of the flashback show Langford, a new employee, arriving to oversee the native workers. As Langford arrives, the man he's replacing leaves, and it's plain that he and his boss Witzel have bad blood between them. Witzel almost immediately takes a dislike to Langford as well, assuming that he's going to be too "green" to prove useful. The conflict between Langford and Witzel dominates the storyline, though neither of them is really the film's main character. Rather, it's the mysterious Tondeleyo, a native woman who was apparently Witzel's lover at one time, and who gradually worms her way into Langford's affections.

Tondeleyo is in every way a caricature of European (and American) beliefs about African natives. She is vain, foolish, and untrustworthy. She knows how to use her sexuality to manipulate men, but doesn't have the ability to care about anyone: the only things she cares about are receiving men's gifts of jewelry or geegaws, which are the only things that reinforce her sense of self. It's purely for this reason that she seduces Langford and gets him to marry her, but she soon grows bored with married life. She may even possess a mild feminine masochism. At one point she recommends that Langford ought to beat her regularly, so that afterward they can make up. But Langford refuses to shoulder the white man's burden: that of curbing the worst traits of the dark races by disciplining them-- and it's for this reason that he's also a failure at controlling the misbehavior of the native workers, all of whom are truculent savages who shirk their labors and pretend not to understand English. Ultimately, Tondeleyo is so bored that she decides that she will murder her husband by introducing gradual amounts of poison into his food. Witzel finds out in time to save Langford, and he dispenses "jungle justice" by forcing the native girl to imbibe a killing dose of her own poison. Langford is shipped back to Europe as "white cargo," which is as good a name as any for a white man who has "gone native."

It would be interesting to study in detail Hollywood's depictions of non-white races during the period when America was at war. Almost certainly there would be some works that were relatively progressive, while others, like WHITE CARGO, were entirely regressive. It seems likely that Hollywood's main interest in the story was largely to find another "exotic" role for Austrian-born Hedy Lamarr, who had become a major star with the release of 1938's ALGIERS. At the same time, there was a limit on how "exotic" a Hollywood actress could pretend to be. Interracial marriages were forbidden by the Hollywood Code, and so Tondeleyo-- apparently originally conceived as a full-blooded "negress" by Simonton-- was rewritten to be a half-Egyptian, half-Arab girl, so that Langford would be able to marry her. Nevertheless, the theme of the original novel is supported in spite of the rewriting: Tondeleyo's bad habits stem from having been raised by the local Black Africans, and so any marriage between the dusky native woman and a white man can only produce a spiritual miscegenation. Interestingly, nothing is said in the movie-- though I can't speak for the play or the novel-- about the prospect of Tondeleyo bearing children. Possibly the idea was omitted because any mention of motherhood might have softened the film's portrait of the character as the demonic incarnation of idle, soul-corrupting femininity. The only aspect that might be even slightly positive is that, whereas most Black African female characters are nearly invisible, Tondeleyo is almost as mythic a temptress as any European witch or siren.

Posted by Gene Phillips at 3:49 PM
Email ThisBlogThis!Share to TwitterShare to FacebookShare to Pinterest
Labels: exotic lands and customs (n), the naturalistic