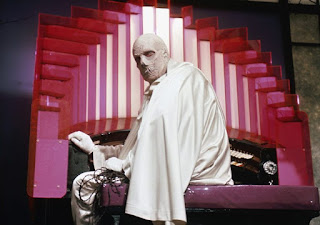 In my review of MADHOUSE-- Vincent Price's last "name above the title" film-- I said that I preferred its potential in its storyline to that of the "wild but shallow" films that immediately preceded the 1974 film. On re-watching the two "Dr. Phibes" films, I don't see anything to contradict that stance. They're great-looking films, and director Robert Feust does a fine job in putting across what I called their "operatic" look. But they're like a lot of horror-films based on a "Ten Little Indians" concept: the entire plot revolves around a designated set of victims being knocked off by a maniac, and usually neither the victims nor any detective-types trying to corral the maniac are generally more than bare ciphers. The focus of the story is almost always upon the nefarious presence of the killer, whether his identity is known or not. In this case, Dr. Phibes also gets points for originality: unlike such repetitive killers as Dr. Carruthers in THE DEVIL BAT, Phibes never repeats a gimmick.

As a substitute for giving all of the designated victims their own character arcs, both films have the cop investigating the murders (Peter Jeffrey in both of these) team up with one of the prospective victims: Joseph Cotten in ABOMINABLE and Robert Quarry in RISES AGAIN. Cotten is one of nine medical persons involved in performing an operation on Victoria, beloved wife of Dr. Anton Phibes. It's not clear if the operation was definitely botched, but Phibes, mutilated by a car crash while fleeing to succor his wife, believes it. As he has a strong emphasis in Egyptology-- a motif that will be emphasized again in the sequel-- Phibes decides to kill each of the participants with some device modeled on one of the nine plagues of Moses' Egypt.  The murder-methods are without question the most imaginative elements in the story, though the script also gets points for the design of Phibes' mutilated face and his method of speaking (his throat being paralyzed, he must communicate through electronic enhancement). This has the effect of reining in the tendency toward over-flamboyance one finds in Price's work during this period.

The script also allows for some mysteries: Phibes is aided in his work by a silent woman, Vulnavia. Nothing is explained about who she is or why she serves him, but in contrast to many henchpeople, Vulnavia seems more than just someone for the villain to talk with. Romance is not seriously suggested, since Phibes is entirely focused on his dead wife, but at times Vulnavia seems like a mirror-image of Victoria, rather like one of the various doppelgangers in Poe's tales.

Phibes doesn't quite succeed with all of his killings, but he disappears in grandiose Fu Manchu style, leaving the door wide open for the sequel. 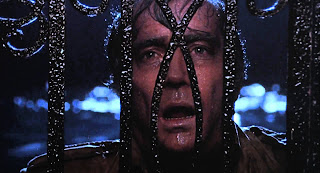 A few critics faulted the sequel for not hewing to an identifiable pattern like the "nine plagues," but I found that said pattern made ABOMINABLE a bit predictable. In the second outing, it's not nearly as clear as to what Phibes is going to do or how he will do it, nor whether his enemies might be able to steal a march on him.

Three years pass after Phibes disappears with his dead wife into a shrine deep beneath his headquarters, and apparently Scotland Yard has been pleased to believe that the evildoer immolated himself, without ever bothering to unearth the bodies and examine them. When the moon reaches a certain conjunction in the sky, its radiance revives Phibes from his suspended animation. Vulnavia, though she appeared to get killed in the first film, shows up to assist the doctor in his grand quest, to take Victoria's body to Egypt, expose her to the legendary River of Life, and restore her life. However, to gain access to the River, Phibes must consult a special papyrus that will lead him to the proper place.

Whatever Vulnavia was doing with herself in those three years, apparently it wasn't house-sitting, for in Phibes' absence his house has been razed to the ground-- again, without anyone nosing around into the subterranean tomb. Phibes rushes to a certain floor-safe, containing the precious papyrus, but the parchment is gone. Fortunately for the exigencies of the script, Phibes knows that only one Egyptian authority in London will be on the lookout for such a papyrus: archaeologist Darius Biederbeck. By the time Phibes rises, Biederbeck has translated the papyrus and plans a trek to Egypt with his fiancee Diana and several helpers. Phibes invades the archaeologist's home, recovers the document, after which it's a (rather slow) race to see who can reach the mystic site of the River first. On the way Phibes enjoys himself picking off Biederbeck's men with various exotic murder-methods.

Biederbeck, though no more a worthy foe for Phibes than Scotland Yard, is at least more interesting in that he's living proof that immortality can be obtained through ancient knowledge: he himself has remained young for a few thousand years, and he plans to extend the same immortality to Diana. He's no more sympathetic than Phibes, for he cares nothing about the men who die for his quest, but at least his fate is somewhat unpredictable.

I give these films a "fair" rating for their meditations on mortality and the idea of overcoming it through metaphysical / cosmological means, though I suspect the script-writers gleaned their knowledge of Egyptian lore from a quick trip to the London Museum.
Posted by Gene Phillips at 4:05 PM
Email ThisBlogThis!Share to TwitterShare to FacebookShare to Pinterest