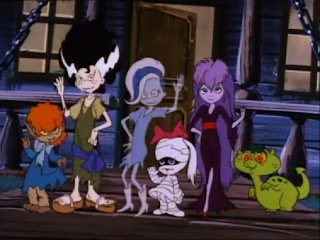 
It's hard to believe, but there was a time when Scooby Doo's TV show was threatened with cancellation. By some accounts the addition of "Scrappy Doo," a puny but feisty version of the speech-impaired Great Dane, may have helped give the show new legs. Of course it might have helped that the show began using real, rather than fake, monsters at the same time. GHOUL SCHOOL is one of three animated telefilms that centered only on Scooby, Shaggy, and Scrappy, and all three of these emphasize boogiemen whose faces can't be pulled off by story's end.

If one can get past the dopey setup-- that terminal slacker Shaggy somehow gets hired as a coach for a preteen girls' school-- then one can probably also buy into the idea that it's a "ghoul school" run by a nice witch named Miss Grimwood, whose students are the daughters of famous monsters.  Of the five in the picture above (not counting the little dragon on the right), four are the feminine offspring of famous male monsters, whom I shouldn't have to identify. Third from the left is Phantasma, the daughter of a ghost, and I found myself wondering if maybe the scripters thought about doing a schtick about "the Opera Ghost" from PHANTOM OF THE OPERA, only to decide that there wouldn't be much they could do with another fake ghost, while a real ghost-girl could do disappearing tricks, invisibility tricks, and so on.

GHOUL SCHOOL, one of many Hanna-Barbera "funny monster" efforts, would probably be reasonably amusing to small kids. At least there's some effort to give each of the ghoul-girls her own schtick: Sybilla the vampiress (a bit of a "nymphet" compared to the others) says words like "fangtastic" and injects the word "bat" into everything; the girl with the "Bride of Frankenstein" hairdo is given the fairly charming name of "Elsa" (for Elsa Lanchester, natch).  The movie's first half displays a bit of a "girl power" theme, as the girls have repeatedly lost a series of volleyball matches to a neighboring boys' military academy. Though Shaggy doesn't really seem to be much of a coach, by the time of this match, the girls somehow get their act together and score their first victory. That said, the boys are drawn as basically sympathetic types, who have to impress their martinet-commander Colonel Calloway.

The movie's second half then introduces a witchy villain, Revolta, who might be seen as the observe of Miss Grimwood. Revolta plans to mentally enslave the five girls and somehow make them serve her as a monstrous 'SWAT team." This doesn't make much sense, though I rather like the fact that Revolta complains that modern monsters have become too "soft." This is of course the main theme of the movie: to refashion the formerly scary images of famous monsters so that they become cute and winsome. Calloway's Cadets join with the Scooby Gang and foil the evil witch's scheme, and then the Scoobies are off to their next adventure.

Posted by Gene Phillips at 1:46 PM
Email ThisBlogThis!Share to TwitterShare to FacebookShare to Pinterest
Labels: the marvelous