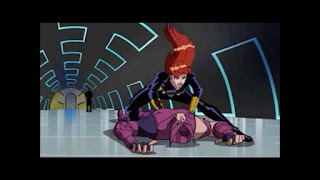 
I finally got around to rescreening the remaining volumes of the EARTH' MIGHTIEST HEROES series that appeared from 2010 to 2013.

The most negative thing I can say against the series is that it doesn't originate any stories, being largely a fannish love-letter to Marvel Comics seen through the lens of Avengers history. (Even the Fantastic Four and Spider-Man, in whose respective series were constructed the main building-blocks of the company's mythos, are brought in as guest-stars for the Avengers.) The most positive thing, though, is pretty positive: it's actually much better written and directed than the live-action MCU AVENGERS series.

An ongoing cartoon-series naturally has a lot more "leg-room" in which to explore plotlines than a live-action film-series, which involves a lot more outlay of time and materials. In my review of INFINITY WAR I commented:

I'm somewhat more impressed by the fact that the MCU has managed to translate one of the key aspects of Marvel Comics' appeal-- that of character-based, soap-operatic melodrama-- without being able to utilize the structure of what I term "the fast serial." Such serial entertainments are predicated on being able to attract patrons with characters who can be viewed with high frequency, whether once a week, as with a television serial, or once a month, as with the most popular commercial comic books.


The show-runners for this Disney XD series clearly sought to capture the headlong excitement of a reader encountering multiple story-arcs within the context of a comic book. For instance, throughout the show's two seasons, whose fifty-two episodes were formatted into six DVD-collections, EMH covers such arcs as (1) the rise of Henry Pym's creation, the super-robot Ultron, (2) the invasion of the Kree, which leads to the creation of a Ms. Marvel independent of Marvel's original version of "Captain Marvel," (3) the concomitant infiltration of the Skrulls, in a plot strongly drawn from Roy Thomas's Kree-Skrull War, (4) the U.S. military's attempt to counter the Hulk with a clone-version called "the Red Hulk," and (5) the incursion of Asgardians upon Earth, in which Thor obviously plays a heavy role. These arcs overlap so often that the effect is almost dizzying, and not all of them are successful, though even the one with the weakest emotional tone, the Thor arc, far exceeds any treatment given the Thunder God in the MCU series.

Because EMH is able to develop its characters in the format of the "fast serial," it's far less dependent on jokes than any of the live-action MCU serials, and thus, even when a given plotline proves lacking, there's always some good character-moments available. Some highlights include:

(1) Henry Pym explaining that he modeled Ultron's original face on the face of an ant, which may or may not have been articulated in some comic I've not read. (It certainly wasn't mentioned in Ultron's 1960s appearances.) In deference to later AVENGERS history, Pym not only shuttles through both his miniscule and gigantic identities, he also undergoes an identity crisis about being a superhero at all. This stands in clear contradistinction to his partner Wasp, who becomes far more invested in being a super-crusader, and who is of course made more badass in deference to current "girl power" themes.

(2) In contrast to the live-action films, Hawkeye and Black Widow are once more allowed to pursue a romantic relationship of sorts, further complicated by being (apparently) at odds in matters of spycraft. They have a couple of well-orchestrated battles, one of which involves what I'll term a "samurai run." In samurai-films this involves two swordsmen running parallel to one another as each watches for an opening to strike at his opponent. It doesn't make nearly as much sense with a woman using a wrist-blaster and a man using trick-arrows, but it's still cool to watch.

(3) The Black Panther joins the Avengers this time with a greater sense of gravitas, with particular emphasis on his ability to formulate long-range plans. A particularly strong scene involves Panther being alone in Avengers Mansion with the obstreperous Hulk. The green giant, observing how Panther sits in quiet meditation, complains that his fellow Avenger "talks too much."

EMH is easily the best overall rendition of the comic-book group, even if it's axiomatic that it probably wouldn't have been made without the success of the 2012 live-action film.


Posted by Gene Phillips at 2:38 PM
Email ThisBlogThis!Share to TwitterShare to FacebookShare to Pinterest
Labels: combative adventures, the marvelous