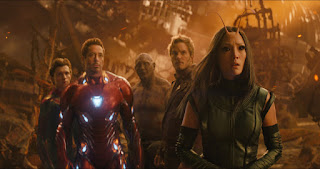 
Though INFINITY's opening weekend yielded one of the most impressive box-office bonanzas for a superhero movie, it's not quite the apogee of the genre. True, it duplicates one of the big appeals of Marvel Comics: the multi-character crossover, this time focusing on nineteen principals, in contrast to the mere dozen seen in CAPTAIN AMERICA: CIVIL WAR. And it's equally true that it's a much more enjoyable and coherent movie than the previous AVENGERS film, the tedious AGE OF ULTRON, which was more concerned with setting up plot-points than telling a good story.

Even critics who dislike superhero movies ought to be able to admire the chutzpah of the filmmakers. Having already sold the mainstream public on films starring both individual superheroes and the assembled Avengers together, the producers chose to "up their game" by crossing over the earthbound Avengers with Marvel's spacefaring crusaders, the Guardians of the Galaxy. Most of the "MCU" films have been planting "Easter eggs" in various superhero flicks in preparation for this mammoth team-up feature, using commendable restraint regarding INFINITY's Big Bad: the redoubtable Thanos. As yet most of the MCU films have avoided cosmos-spanning threats, usually focusing on catastrophes taking place in a restricted spaces, whether on Earth or in exotic realms like Asgard or Xandar. This time, even though much of the action takes place on Earth, or at otherworldly sites already visited by the Galaxy-Guardians, it's explicit that Thanos's evil will affect every sentient being in the universe.

In contrast to the comic-book villain, a sort of cosmic necrophile who wanted to destroy the universe in homage to the Goddess of Death, this Thanos is framed as an obsessed extremist like Erik Killmonger in BLACK PANTHER. However, whereas Killmonger is merely a facile bundle of ideological postures, the writers of INFINITY strive to make Thanos a truly epic villain. His backstory isn't much better delineated than that of Killmonger. Yet Thanos is given a coherent character-arc, balancing his obsession with winnowing the universe's population with his paternal affection for a little girl who will grow to become Gamora, one of his most dedicated enemies.

Not a few reviewers have celebrated the writers' ability to evoke distinct emotions for each of the nineteen characters, as well as assorted support-cast members. I'm somewhat more impressed by the fact that the MCU has managed to translate one of the key aspects of Marvel Comics' appeal-- that of character-based, soap-operatic melodrama-- without being able to utilize the structure of what I term "the fast serial." Such serial entertainments are predicated on being able to attract patrons with characters who can be viewed with high frequency, whether once a week, as with a television serial, or once a month, as with the most popular commercial comic books. The medium of cinema sometimes flirted with such formats, as with weekly film-serials. But in film, most sequels and serials have been separated by considerably more time-- be it about three months, as seen with B-films like the Charlie Chan and Andy Hardy franchises, or three years, like the original STAR WARS series. MCU films are "slow serials" like STAR WARS flicks, and slow serials cannot devote a lot of time to continuing plotlines. For instance, in between ULTRON and INFINITY, the Vision and the Scarlet Witch become lovers, but viewers must fill in the blank spots themselves, rather than seeing the love-affair progress as it would in a "fast serial." That the MCU has "trained" its audience to look forward to such adumbrated dramatics impresses me no end.

Humor, of course, is the MCU's key to making the characters relatable, though since the films can't use drawn-out sequences, jokes and funny character-moments assume far more importance than they did for Silver Age Marvel. The MCU also works with might and main to conceive large-scale scenes of spectacular violence, and INFINITY has some good fight-scenes, though nothing here measures up to the "airport scene" in CIVIL WAR.

Whereas all previous MCU films have been structured to give closure in spite of overarching plot-lines, INFINITY finally comes to its EMPIRE STRIKES BACK moment, trusting that the audience will accept a true cliffhanger ending and come back for the next chapter. This is appropriate since INFINITY's box-office earnings have exceeded those of each of the recent STAR WARS outings. The outer-space scenes are executed efficiently but with little of George Lucas's elan, but then, as I've noted elsewhere, the "sense of wonder" in the MCU comes at a distant third from the jokes and character-arcs.

I enjoyed the way the film managed to balance so many such arcs, though some characters inevitably get less attention than others. I expect that the second part of INFINITY will be no less impressive in this regard, though I'll be more interested to find out how the MCU manages to "top itself" in its impending "Phase  Four."
Posted by Gene Phillips at 3:16 PM
Email ThisBlogThis!Share to TwitterShare to FacebookShare to Pinterest
Labels: combative adventures, the marvelous