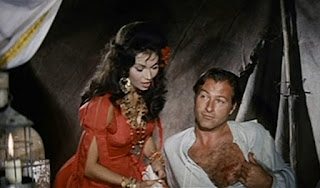 It seems incongruous to type "spoilers" for a penny-ante swashbuckler like TERROR OF THE RED MASK, whose place in history comes down to being one of assorted Euro-thrillers made by star Lex Barker after he shed the loincloth of Tarzan (so to speak). Yet for me the only points of interest in this routine flick consist in revealing the identity of the titular freedom-fighter, the Red Mask.

Ineluctably, RED MASK is just another take on the "Zorro" formula, this time transplanted to 15th-century Italy, where the crimson-attired crusader battles against the tyrant duke Astolfo. However, most Zorro-imitations make clear from the beginning that the viewpoint character is also the person who is, or is destined to become, the masked avenger of the title. Instead, Lex Barker plays Marco, a roving warrior-for-hire who is hired by evil Astolfo and who gets wooed by the film's two lead females. Marco, not the Red Mask, gets all the best action-scenes, and the film's simple story consists of two simple plotlines: the Duke's attempts to uncover the identity of the Red Mask, and Marco's decision as to whether to stand with the freedom fighters against the exponents of tyranny. This focus on "the guy who helps the masked avenger" rather than the avenger has sometimes shown up in comedies like 1955's THE COURT JESTER, but rarely in straight action film. Occasionally there have been cases where the centric protagonists shared billing with an ally of some sort, as seen in both HERCULES AND THE MASKED RIDER  (where "the Rider" is the star) and in THE THREE STOOGES MEET HERCULES (where the Stooges are in the ascendance). But from the title, one would expect the Red Mask's "terror" to be the focal point of the narrative.

It's no surprise when Barker's manly Marco decides to help the oppressed, or, depressingly, that he chooses the virginal court-lady (Liana Orfei) over the fiery gypsy (Chelo Alonso). There is a slight surprise in the Mask's identity, for it's none other than Karima the female gypsy. She's only seen in costume a couple of times-- the only reasons this film gains "uncanny" status-- but she does sword-fight a little in one scene, so she's at least more than just a pretty face. The "terror" of the title may be her own Poe-esque guilt, because at one point she poisons a man who loves her because he's on the wrong side. Later she gets guilty about her deed and hears voices, and ends up dying while the Good Girl gets the Good Guy.

Thus the film does also possess a little cachet in depicting a female swashbuckler, though the Red Mask's secondary status next to Barker's star-turn won't put her in the same league with the Black Whip and other distaff duelists.

Posted by Gene Phillips at 12:41 PM
Email ThisBlogThis!Share to TwitterShare to FacebookShare to Pinterest
Labels: combative adventures, the uncanny