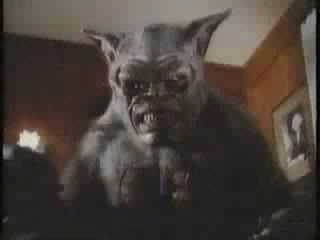 
CELLAR DWELLER, a low-budget B-flick directed by special-effects guru John Carl Buechler, has one thing in common with the more critically lauded UNBREAKABLE. Both are fantasy-films that involve made-up comic book lore yet show no awareness of how comic books are produced or marketed.

DWELLER's one idea-- that comics-artists can call up a monstrous being called the Cellar Dweller when they illustrate his imagined adventures-- is actually the sort of concept that often appeared in anthology horror-comics, and, for that matter, in anthology TV-shows. There's so little character development in Don Mancini's script that often he seems to be marking time till the big "surprise ending."

Thirty years before the main story, the creator of the comic book "Cellar Dweller" (Jeffrey Combs) dies while trying to rid the world of his beastly creation. This is enough time for a young woman named Whitney (Debrah Farentino under another name) to grow up reading the comic book and to decide that she too wants to be a comics-artist. Whitney petitions to join a "school of the arts" that now exists in the building where the Combs character died. She receives a grant to study at the school, though it seems to function more as an art colony, where various artists just sit around performing for one another. The "den-mother" to the group is Mrs. Briggs (Yvonne DeCarlo), but she seems to function less as a teacher than some sort of glorified housekeeper.

So Whitney starts doodling away, producing her own illustrations of the "Cellar Dweller" character. How a commercial comic book could have been built around a big furry monster who has no particular raison e'tre-- except that he's apparently conjured forth from the human imagination-- is anyone's guess. So the monster appears and kills some of the disposable characters. Whitney finally figures out that the real supernatural is at work, and tries to counter the creature's unexplained rampages. Both the solution and the "trick ending" are less than rewarding.

Farentino gets the most scenes, so she's able to be fairly engaging, despite the paltry characterization. DeCarlo and the others all seem to be bored with their roles, which are-- appropriately for the medium evoked-- paper-thin.

Both writer and director went on to better things, with Don Mancini collaborating on the birth of the "Chucky" franchise while Buechler made a much better monster-flick in the better-than-average FRIDAY THE 13TH: THE NEW BLOOD.

Posted by Gene Phillips at 3:30 PM
Email ThisBlogThis!Share to TwitterShare to FacebookShare to Pinterest
Labels: the marvelous