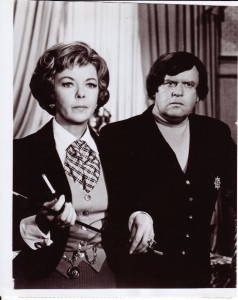 
The once popular radio serial I LOVE A MYSTERY (1939-44), which followed the adventures of crusading detectives Jack, Doc and Reggie, doesn't seem to have had much success in other media. Three low-budget films in 1945-6 are probably the best-known artifacts of the franchise today, and even these aren't entirely representative, since for complicated reasons the films elided "Reggie" and focused only on Jack and Doc.

This telefilm, almost certainly designed as a pilot for a possible series, is the only other artifact of much repute, though it may not be in the spirit of the radio serial. Though MYSTERY first aired on television screens in 1973, it was completed in 1967-- which leads me to suspect that writer-director Leslie Stevens was on some level seeking to emulate the then-reigning success of the BATMAN teleseries.

I wouldn't quite call MYSTERY "camp," but more "tongue-in-cheek" like Stevens' roughly contemporaneous work on IT TAKES A THIEF. Amid plentiful bon mots, the detective trio--Reggie finally getting a live-action appearance alongside Jack and Doc-- becomes involved in looking for a vanished millionaire named Cheyne (who only appears in one scene, played by a "famous face" in a short cameo). They arrive at the millionaire's island, where his crazy wife Randolph (Ida Lupino) tells them that she has her husband chained to a bomb and will kill him if the detectives don't do her bidding and participate in her weird psychological experiments. The woman with a man's name is frequently compared to a black widow, and seems to have a stifling "s/mothering" effect on her four grown children: three sexy daughters and one long-suffering son with the appropriate name of Job.

MYSTERY is good for a quick watch, but it's not meant to be given much thought, even if one can keep track of the loony plot. It's a film that doesn't appear in a lot of metaphenomenal film-concordances, apparently because Lady Cheyney doesn't use any super-scientific devices or look like Bela Lugosi. Still, she's pretty crazy, and though she's not responsible for the one or two murders thrown in to spice things up, she still takes the film into the realm of the perilous psycho. The automatic bomb also satisfies the "outre devices" trope.

It is however not a combative film. The three detectives-- the best acting coning from David Hartman-- do get into a scuffle with a couple of not very aggressive pet lions, but it's hardly a battle designed to rouse the envy of Samson the Danite.

Posted by Gene Phillips at 3:41 PM
Email ThisBlogThis!Share to TwitterShare to FacebookShare to Pinterest
Labels: diabolical devices (u), perilous psychos (u), the uncanny