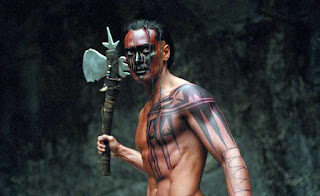 
Anyone who ignores my spoilers will have only himself to blame when he reads my assertion that BROTHERHOOD OF THE WOLF is at base an update of Conan Doyle's HOUND OF THE BASKERVILLES.

Once again, we have a menacing animal set loose on a rural community. Doyle's fiendish hound is based on a legend that Doyle makes up, but in the film, director/co-writer Christopher Gans and his writing partner Stephane Cabel invent a fictional take on the 18th-century story of the Beast of Gevaudan. The mystery of this storied beast was never solved, but Gans and Cabel come up with a semi-rational explanation for their creature, thus moving the film into the uncanny domain of the "phantasmal figuration."

In HOUND, there's a schemer using the devil-dog for the purpose of profit. In WOLF, it's a mysterious "brotherhood" which, much more implausibly, uses a living beast to create the illusion of a hellish wolf preying upon the residents of Gevaudan Proviince. The fact that the rural citizens begin complaining to the King of France is also part of the brotherhood's plans, though I for one never saw what the beast's rampages were supposed to accomplish.

King Louis XV, though plagued with political concerns related to the impending French Revolution, responds by sending soldiers to hunt the alleged wolf. He also sends the royal naturalist to preserve the beast's body when it's killed: one Gregoire de Fronsac (Samuel LeBihan). Gregoire is no retiring taxidermist a la Norman Bates, though, but a well-traveled knight who's adept at fighting with weapons and bare hands. At Fronsac's side is his Iroquois blood-brother Mani (Mark Dacascos), who's no less adept a fighter, though his kung fu high-kicks certainly don't make one think of Native American fighting-styles. Fronsac is intrigued with the reports of the gargantuan wolf, especially since he's traveled in many lands and seen many exotic animals; at the same time, he incarnates the rationalistic scientific spirit of the times. In contrast, Mani, the last of a tribe wiped out by the British, is a priest with unique medicinal skills and an apparent sensitivity to other forms of life. He is of course the first Native American seen by the locals of Gevaudan, but the character's appeal extends to the audience as well: whenever Dacascos is on the screen with LeBihan, the former steals some if not all of the scenes from the latter.

Gregoire also becomes embroiled in sussing out the local aristocracy and royal hangers-on, even before he's actively looking for a human agency behind the wolf-creature. He's also more than a little fascinated with a young woman, Marianne, daughter of the local Count. Though for the most part peasants are the ones being killed, and Gregoire is their ally against the brotherhood, the film spends an awful lot of time with Gregoire associating with the moneyed classes.

The script isn't so much opposed to capital, though, as to religion. One of WOLF's most striking scenes begins in HOUND-esque fashion, with a helpless peasant-woman being pursued across a field by an unseen pursuer. She tries to climb up onto a large boulder, and the camera tightens its focus on her as she's seized by the beast, still off-camera. As she's flung about in the creature's jaws, her body causes her arms to flail so that briefly she resembles the figure of the crucified Christ-- and just to make sure no one misses the comparison, director Gans superimposes the image of a crucified Christ-icon over the scene. This sort of visual trope takes on new significance when it's eventually revealed that the Brotherhood is a crypto-religious organization. That said, the script is less than engaging on its implied philosophical issues.

At base, WOLF is designed to compete with American-style action-movies, and it's one of the few French commercial films to successfully duplicate the feverish fight-scenes of that idiom, as long as one can invest in the concept of kung-fu Indians. There's also a minor use of a drug able to simulate death, so that the film also manifests an "outre devices" trope, and an "astounding animal" trope that pertains to the nature of the beast.

It's a good thriller, most engaging in the first half but becoming less well organized in the latter scenes. But its take on Revolution-era politics leaves a lot to be desired.

Posted by Gene Phillips at 2:47 PM
Email ThisBlogThis!Share to TwitterShare to FacebookShare to Pinterest
Labels: astounding animals (u), combative adventures, outre outfits (u), phantasmal figurations (u), the uncanny