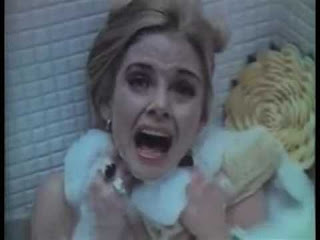 
I'm not meaning to damn INVISIBLE STRANGLER with faint praise by stating that there are many, many worse films. I'm just emphasizing that, while it's not especially good, one could watch it in a mood of pure escapism and find oneself slightly diverted.

There's probably some story behind the fact that the credited director is John Florea, while of the two persons cited on IMDB for uncredited director-duties, one of those two is the screenplay-scribe Arthur C. Pierce. Florea, Pierce and Gene Fowler Jr all had numerous credits directing and/or writing for television, and in most respects STRANGLER looks like a made-for-TV movie. It's a little more stylish than most such telefilms, particularly in respect to coming up with ways for the titular killer to knock off his victims.

This is one of the few films, along with NO WAY TO TREAT A LADY, in which a killer focuses only upon mature women, in contradistinction to the PSYCHO model. As the film opens, the strangler of the story, Roger Sands, resides in prison. He's made liberal use of the prison library, however, particularly with respect to studies of the occult sciences. He demonstrates his newfound telekinetic powers on an unruly cellmate, and then turns invisible, simply walking out of prison while the guards search for him.

He kills one victim, calling her "mother" as she lolls in a bubble-bath, but somehow the invisible man leaves behind very visible fingerprints. Police lieutenant Barrett (Robert Foxworth) learns that the killer is Roger Sands, the adult son of a famous celebrity model who tried to keep her son out of the public eye, the better to maintain her illusion of sexiness. Finally Roger snaps and strangles his mom, and then starts trying to kill other mature celebrities who remind him of his maternal unit. He attacks five women but fails to kill any of them, allowing them to testify at his trial and have him put away. The newly empowered Invisible Strangler then picks up where he left off, killing all of his mother-substitutes while Barrett and his subordinates try to head him off.

The script by Pierce and two other writers is entirely by-the-numbers, showing no interest in Sands' character except what's needed to keep the pot boiling. The lieutenant and the women he protects are similar ciphers, though somehow the producers got an unusual number of former big-names to participate in this lowbrow exercise, such as Elke Sommer (who gets the most screen time), Sue Lyon, and Leslie Parrish. Stephanie Powers plays Barrett's ditzy girlfriend, who I suppose was intended to serve as the film's sole comedy relief. It's no reflection on Powers' talents to say that she's not successful.

Aside from a few stylish scenes-- like one in which a victim is invisibly strangled in front of witnesses, who have no idea what's happening to her-- the film is a workmanlike diversion, and nothing more.
Posted by Gene Phillips at 1:05 PM
Email ThisBlogThis!Share to TwitterShare to FacebookShare to Pinterest
Labels: the marvelous