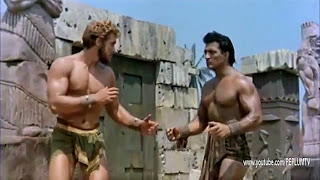 
These two peplum-efforts had three aspects in common. Both starred bodybuilder Kirk Morris, both appeared late in the waning cycle of the Italian muscleman films, and both featured a hero of one ethnicity struggling in a foreign land. The last of these is the most minor distinction, though, since the muscleman films were well known for having their heroes wander hither and yon across the globe.

HERCULES, SAMSON AND ULYSSES was filmed as "Hercules Challenges Samson," which is the better title since the "Ulysses" here barely does anything of importance. I assume his name got pushed to top billing because of some promoter's idea that a third name in the title would bring in better box office. Or maybe the same promoter had seen positive returns for 1962's ULYSSES AGAINST THE SON OF HERCULES, and decided to bump up the Ithacan chief for that reason. Surely the world will never know, and even I don't much care.

Hercules, Ulysses and their friends do spend a few quiet moments in their native land before heroic duty calls them to slay a menacing sea-serpent. The heroes succeed, but their boat is swamped by a storm and the Greeks are shipwrecked on the shores of Judea.

This could have been the setup for a potentially fascinating "clash of cultures," but since it's a muscleman film, the script's only concern is to bring about a clash of titans. The one moment of culture-shock comes when the seductive wench Delilah, in league with some of the local tyrants, makes some minor moves on Hercules, seeking to inflame the Greek to fight local boy Samson. It's unclear whether or not Delilah has yet made any movies on Samson, although the two do end up together, meaning that Samson's enervating haircut has yet to take place.

As for the fight, the film delivers a good one, with the Greek and the Danite bashing each other about in the ruins of an abandoned city, tossing around stone pillars like spears. However, most of the other spectacles in the flick are subpar, and neither Morris nor the actor portraying Samson (billed as 'Richard Lloyd," but actually an Iranian bodybuilder) have enough charisma to enliven the slow scenes. However, there are some moderately funny scenes here and there, particularly one that takes place at sea, when the survivors of the shipwreck quarrel about eating their homing-pigeons.

ATLAS AGAINST THE CZAR has nothing to do with the Titan of Greek myth, for the hero renamed "Atlas"-- and also "Samson" in some translations-- is just Maciste, Italy's all-purpose hero. It's not even clear what culture the bare-chested hero hails from. He's revived from a long slumber in a cave, and then promptly gets mixed up in intrigues relating to the medieval Czar Nicholas.

Morris's Atlas gets to toss rocks around and to have a big tug-of-war to demonstrate his strength, but it's hard to say if he qualifies as a marvelous hero. However, the element of the centuries-long slumber proves sufficient to confer a marvelous phenomenality.

The intrigues are made duller by the fact that almost everyone aside from Atlas wears heavy fur garments. Thus, one of the genre's most enduring factors-- that of comely women in diaphanous garments-- is dumped out of hand, and nothing quite makes up for that lack.