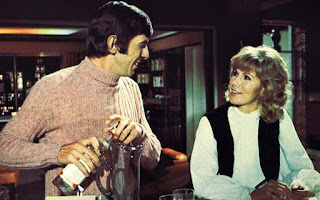 Aside from the 1952 boxing movie KID MONK BARONI, the failed TV-pilot BAFFLED would seem to be one of the few times Leonard Nimoy was the main selling-point of a film or television project. To be sure, his character of Tom Kovack-- a race-car driver who begins having psychic visions-- forms an ensemble of two with his fellow psychic investigator Michele (Susan Hampshire), but I tend to doubt that Ms. Hampshire had much "name-above-the-title" standing in 1972.

Like most Good Samaritans in TV-land, when Michele informs that someone's life will be in danger if Kovack doesn't investigate his visions, Kovack drops everything in his schedule and flies to England with Michele. In order to gain access to a family manor, Kovack poses as a distant relative to the family, and Michele gets in on some other pretext. The English side of the family also plays to a real American relation, Andrea (Vera Miles) and her middle-school aged daughter Jennifer. They hope to be reunited with Jennifer's estranged father after being separated from him for over ten years. At the same time, Jennifer seems to be manifesting her own psychic powers, and she has a strange, midnight conference with her father, in which he mouths the suggestive lines, ""In some ways you'll have to give up being a child... you'll have to keep a number of secrets from your mother..." At the same time, the man gives Jennifer an odd amulet, which causes her to act more "grown-up," so much so that Michele passes a remark about Jennifer having gone from thirteen to fifteen in the space of a day.

The mystery aspects of the story are typical TV-fare, amounting to a lot of incidents that don't necessarily add up in the final analysis. The amulet-business is one of the least well-explained. The man who gave it to her-- not actually her father, but a masquerading conspirator-- is supposed to be some sort of mystical expert, and yet his main concern in the story is to bilk Andrea out of the family inheritance. The two plots don't cleave together in the least. As if to make up for the deficiency of the mystery angle, the pilot-film does conclude with a pretty good fight between Kovack and his opponent, which suggests that, had the show been bought, it might have been more action-oriented than most TV-shows about occult detectives.

For modern viewers, most of the interest will be gauging whether or not "Spock" could have carried this somewhat bland teleseries. But those viewers will be forever "in search of" the answer to that question.

Posted by Gene Phillips at 3:28 PM
Email ThisBlogThis!Share to TwitterShare to FacebookShare to Pinterest
Labels: combative dramas, the marvelous