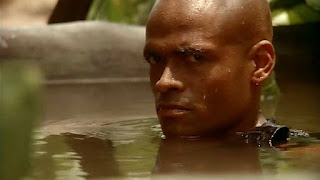 
These two films are linked only via subject matter, in that both focus on robotic protagonists, one a noble "thinking machine," the other a remorseless killer. They were filmed almost ten years apart and may have both taken a certain amount of influence from THE TERMINATOR, but I review them here because they have opposing flaws.

SOLO is a well-mounted, fairly expensive action-film, but it's bad because it has, unlike its android hero, no soul. The titular character is invented by an American research program as a mechanical substitute for men in the field, and he's deployed in Central America in order to use his superior strength and endurance to combat guerrilla insurgents. However, Solo, though not capable of expressing emotion, somehow develops a conscience and doesn't want to kill anymore. Solo escapes his handlers and takes refuge in the jungle, eventually finding his way to a small village. For a time the android tries to learn humanity from the poor folk, and then defends them from guerrilla attacks. However, the American military isn't willing to let things go, and so they send a second android to subdue Solo.

The badness here is SOLO's utter predictability, and much of the fault lies in the performance of Mario Van Peebles. Granted, it's challenging for any actor to simulate an intelligent android, but a good performer can at least show some semblance of such an imaginary being's thought processes. Van Peebles, always IMO a superficial actor, merely keeps his expression blank-- though in a sense his blankness matches that of the script. Whatever the merits of the original novel, the film-script has no interest in the process by which Solo becomes sentient. His interactions with the Central Americans follow a completely routine progression-- there's even a cute kid involved!-- and the only saving grace is a pretty good fight between Solo and the updated android. It's perhaps a symptom of political correctness that the "bad android" is white, which begs the question as to why the robot's creator, a white guy (Adrien Brody), chose to make Solo look black in the first place. 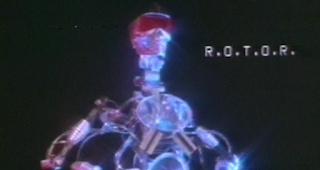 The sins of R.O.T.O.R. are more obvious, given that this howler is more in the mold of Edward Wood Jr. According to IMDB, this was the only feature film completed by Cullen Blaine, who produced, directed, and co-wrote R.O.T.OR., but whose credits are dominantly "art department" chores for numerous cartoon works.

The abbreviated title applies to a robot cop being developed for the Dallas police department by the comically named scientist "Coldyron." Despite copious textual comparisons between Coldyron and Doctor Frankenstein, the scientist acts and talks most of the time like Dirry Harry Callahan:

The only difference between a hero and a villian is the amount of compensation they take for their services. At our pay scale, I'd say we're closer to heroes.


Like Harry Callahan, Coldyron butts heads with the establishment. Though he's informed the politicians that R.O.T.O.R. won't be ready for deployment against criminal scum for four years, a particularly corrupt politico kicks Coldyron off the project so as to activate the robot-cop and benefit from the publicity. It naturally does not occur to the politician that he might get bad publicity from a robot-gone-berserk, but nonetheless he puts a secondary scientist in charge of the project. In no time, R.O.T.O.R.. gets loose and starts administering maximum punishments for minimal crimes. So the courageous Coldyron decides to destroy his creation, with the help of a lady scientist named Steele, who also happens to have "biceps of steel."

The only thing that makes R.O.T.O.R. marginally more entertaining than SOLO is that the former is so dumb that it isn't entirely predictable. As stupid as the movie's plot is-- particularly in terms of a "surprise ending"-- Blaine and his co-scripters supply a non-stop barrage of awful lines, such as:

I got more than a newspaper. And you get to guess what it is.

Let me tell you something, mister. You fire me and I'll make more noise than two skeletons making love in a tin coffin, brother.