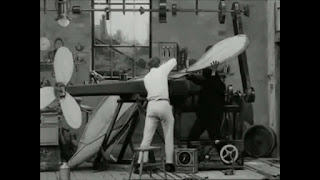 So few silent films have survived the past century that it's probably impossible to track down what may have been the first combative adventure films. Going by a partial list supplied by R.G. Young in his ENCYCLOPEDIA OF FANTASTIC FILM, there seem to be, even in the very late 1890s, a tiny number of films inspired by either Dumas's "Musketeers" or the same author's "Corsican Brothers." But it seems likely that most of these works have gone the way of all decayed celluloid. Thus it's all but impossible to know how many of them may have focused on the adventure story in what I've termed the "combative mode"-- that is, the type of adventure that generally culminates in a physical conflict between better-than-average opponents. I realize that my preoccupation with this theme does not mean that this is the only theme in adventure-fiction, and indeed, Dumas's "Corsican Brothers" is a significant adventure-story even though it does not contain a combative climax, as I explained in my essay A SUBCOMBATIVE CORSICAN.

Nevertheless, a corollary question occurs to me: not just what's the first film of combative adventure, but also the first one with significant metaphenomenal content?

One candidate is THE AIRSHIP DESTROYER. This short film was orchestrated by British filmmaker Walter R. Booth, who like his predecessor George Melies, had been a professional magician, interested in using the new medium of film to captivate audiences. The surviving copy of DESTROYER runs about nine minutes long, but apparently it was originally about 20 minutes, and the first in a series of three related works, though the other two have been lost. Whether they even used any of the characters or situations of DESTROYER, I do not know.

"Future-war" stories-- those in which science-fictional technology played some role-- had been popular in Europe and America since the 1871 novel THE BATTLE OF DORKING. On some occasions fantastic inventions were solely in control of individuals, as with Captain Nemo of Verne's 1869 20,000 LEAGUES and Robur in the same author's 1886 CLIPPER OF THE CLOUDS. However, the majority of "future-war" stories seem to focus on how new technologies are being used by entire nations.

DESTROYER takes a page from both strategies. At the opening of the short, an unnamed  young British inventor has just met with his lady-love, possibly proposing marriage (the short has no title cards). The young lady takes the inventor to her father, who for unknown reasons roundly rejects the suitor and removes his daughter from the inventor's presence. However, just as the inventor is down in the dumps, Britain suffers an attack by dirigibles raining down bombs, which scenario possibly owes something to Verne's CLIPPER concept. The invaders driving the "aerial destroyer" fleet are never identified, and wear heavily-hooded uniforms that look like costumes for a FLASH GORDON serial. In fact, the invaders indirectly do the inventor a service: they blow up the house of the tyrannical father, killing him but not killing the inventor's intended.

However, the ingenious inventor just happens to have a device capable of thwarting the invasion: a single "aerial torpedo," which looks much like a real torpedo enhanced by big butterfly-wings and a rotary tail. The torpedo blasts down one of the airships, the inventor and his lady celebrate, and the film ends, presumably with the implication that Britain will be able to mass-produce the torpedoes fast enough to take out the other airships.

Booth's FX depend largely on dissolves and the use of paper models. For a modern audience, the sight of a paper London burning isn't especially convincing, but the spectacle probably meant more to audiences to whom the very idea of aerial combat was still novel. Though Booth created a fair number of comical, antic fantasies after the manner of his predecessor George Melies, DESTROYER remains as grounded in contemporary reality as the best science-fiction films. The trope of the young man who proves his mettle, and thereby his right to marry his beloved, probably had appeared in silents in other forms, but this might be one of the first iterations of the theme in metaphenomenal cinema. And, in keeping with my search for combative fantasies, this one satisfies my requirement for an altercation between two formidable forces.
Posted by Gene Phillips at 11:21 AM
Email ThisBlogThis!Share to TwitterShare to FacebookShare to Pinterest
Labels: combative adventures, the marvelous