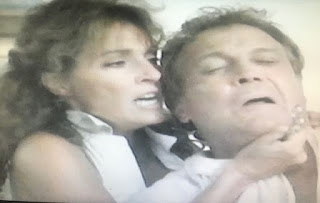 As with my review of APRIL FOOL'S DAY, there's no way I can address the phenomenality of this item without revealing the story's big secret: that the "murders" depicted are all a big fake, and that there is no psycho-killer, just a hoax-- though not for the same reasons seen in the psuedo-slasher, and with none of the "uncanny effect" of the earlier film.

Magazine owner/fashion photographer Rex Kingman (Lee Majors) is so domineering that he has "king" in his name twice. He rides herd over a covey of models, including his editor/ex-lover Kate (Jennifer O'Neill), and he desperately needs to score big with his next magazine publication, to prevent his being bought out. He and a few assistants fly Kate and the models out to a deserted island for a photo shoot. In jig time, the group gets stranded on the island and models appear to be die off, though very little blood or gore is ever seen.

This time, the lack of gore isn't just because this is a TV-movie; it's because the models are part of a cabal, organized by Kate, to drive the tyrannical magazine-owner into desperation. Kingman's a heartless user who doesn't care about his "ten little Indians" getting knocked off, or even, apparently, about whether he might be a target for death himself. But in due time he gets weirded out enough by the crusade of the "pseudo-psycho" that he signs away his magazine to Kate and the others, and then has to cry in his beer when the hoax is revealed. The end.

This "phantasmal figuration" is inexorably naturalistic. Even though there is an attempt to suggest the presence of a psycho-killer, the phony killer lacks any uncanny aspects, and therefore is more in line with naturalistic types of "perilous psychos" like those in FRENZY and THROUGH NAKED EYES.
In place of bloody mayhem, the telefilm offers assorted sexy photo-shoot scenes, though the banal direction robs these scenes of any real punch. Jennifer O'Neill is the only actress who projects real charisma, and she has the best single scene, which is actually a "cheat," since it involves Kate dreaming that she's being attacked by a masked psycho, despite her knowledge of the hoax. Lee Majors, however, is beyond awful. No matter how many vile, heartless things he says, his delivery is the same as it was for the Six Million Dollar Man, which makes it impossible for the viewer to properly despise Kingman. However, given the lack of even an imaginary psycho like "Buffy St. John" of APRIL FOOLS' DAY, Kingman is by default the movie's central character, not unlike the more eminently hissable victim of 1947's SCARED TO DEATH.

Posted by Gene Phillips at 1:44 PM
Email ThisBlogThis!Share to TwitterShare to FacebookShare to Pinterest
Labels: phantasmal figurations (n), the naturalistic