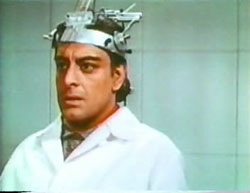 
The agent known as OSS 117-- given the name "Hubert Barton" in the subtitled version I saw-- began in a series of prose spy-thrillers that actually predated Ian Fleming's more celebrated Bond books. There was apparently one OSS movie that preceded 1962'S DOCTOR NO, after which there were five more OSS films, all of which reputedly followed the general pattern of the Eurospy film. SHADOW OF EVIL was the second of these post-NO films, though the first to be in color, and the last to star former Sinbad-star Kerwin Matthews.

EVIL is nicely photographed but lacks the charming fight-choreography-on-a-budget seen in the better Eurospy films. Matthews' Barton is sent to investigate the killing of a CIA agent in Bangkok, which has something to do with outbreaks of bubonic plague in the East. At a formal soiree Barton encounters the supposedly Indian "Doctor Sinn" (Robert Hossein) and his equally un-Indian sister Lila, as well as chatting up a blonde chick.

The meandering story, short on fights and on romance, eventually ramps up in the final thirty minutes. Barton is captured by Sinn's organization, though he's really faking being drugged, and when a scientist tries to put Barton into an "interrogation chair," Barton turns the table on him and, for good measure, ties up two other malefactors back to back, making for the film's only moments of worthwhile comedy. The low-key OSS finally discovers that Sinn plans to drastically reduce the world's population through the release of plague-bearing rats, and that he plans to rule over his group, "the People Elect," though it's not clear what "elect" qualities the members hold in common. Anyway, Barton finally has a decent fight against Sinn himself, and the film ends with a lot of explosions and Barton escaping with his foremost girl Lila.

Matthews, Pier Angeli and most of the rest of the cast are generally wooden, and only Hossein brings anything like a sense of elan to this thoroughly average outing.
Posted by Gene Phillips at 2:30 PM
Email ThisBlogThis!Share to TwitterShare to FacebookShare to Pinterest
Labels: bizarre crimes (u), combative adventures, the uncanny