RETURN OF THE CAPED CRUSADERS-- the first of two DTV animated films which re-united Adam West, Burt Ward and Julie Newmar in their iconic Bat-roles-- doesn't come close to the more inspired lunacy of the 1966 teleseries. Granted, it gets the overall "look" of the series better than DC's odious "Batman '66" comic books. But while the series mixed corny slapstick with knowing irony (and just enough real adventure to please the kids), RETURN is pure corn, with bits of fannish trivia thrown in (something that the producers of the teleseries could not have cared less about).

The plot seems somewhat indebted to numerous 1950s and 1960s Batman-stories in which the hero or his sidekick Robin underwent some sort of bizarre physical transformation: Giant Batman, Baby Batman, Super-Strong Robin, etc. This time, Batman (West) and Robin (Ward) are faced with yet another teamup of the TV-show's four most celebrated villains: Catwoman (Newmar), Joker, Riddler and Penguin. As a result of Catwoman's attempt to brainwash Batman to make him evil, the hero loses his sanguine cool and becomes a full-time bastard. With the help of a "replica ray," Batman creates numerous duplicates of himself and uses his "clones" as a task force to ride herd on Gotham. Robin and Catwoman team up to restore Batman to his goodguy status.

It's fun to hear the three main actors reprise their roles via voice-work. There are numerous shout-outs to the teleseries (most of the signature villains created for the show participate in a gang-battle against the Bat-clones, such as Egghead, King Tut, et al), as well as to the Golden Age comic book (one sound-effect during a fight goes "SPRANG") and later DC iterations (Miller's DARK KNIGHT is conspicuously quoted). Joker, Penguin and Riddler don't get anywhere near the good lines that Catwoman gets, though, and might as well have been some of the also-ran villains of the series. And though this Catwoman isn't the super-athlete seen in the current Bat-comics, this time she does get a minor fight-scene against some of the villains. This diverges from the policy of the teleseries, which almost never allowed its female guests to take part in scenes of violence (not counting the co-starring Batgirl in the third season, obviously). 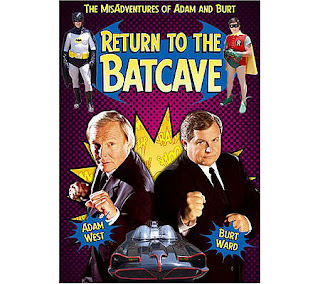 The live-action telefilm RETURN TO THE BATCAVE, though made thirteen years earlier, nevertheless mines almost the same field of corny humor, though Bat-fans won't find anyone catering to their love of trivia here. In this tale, real-life actors West and Ward become involved in the theft of the Batmobile by persons unknown, and get mixed up with other actors with whom they worked on the Bat-series, Julie Newmar and Frank Gorshin. There are bits of series-trivia worked in, but nothing very arcane, and the producers seem to have believed that the casting of the old favorite actors was the movie's main selling-point.

During the investigation, West and Ward get into a couple of not-very-real fistfights meant to ape the style of the "biff-bam-pow" kinetics of the series, but done with two really old guys in mind. So there's no intention of really delivering any sort of action along with the comedy. There is, however, an uncanny element in the form of a sleep-gas bomb, so at least this silly thing isn't a total capitulation to naturalistic thinking.


Posted by Gene Phillips at 4:35 PM
Email ThisBlogThis!Share to TwitterShare to FacebookShare to Pinterest
Labels: combative adventures, diabolical devices (u), the marvelous, the uncanny