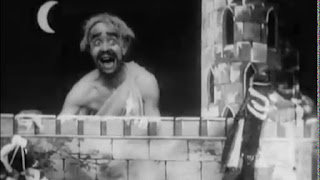 
While in the process of reading up on the silent-era British filmmaker Walter R. Booth for my review of THE AERIAL DESTROYER, I noted a reference to an even shorter and even earlier film, called variously THE MAGIC SWORD and THE MAGICAL SWORD. Fortunately this film, like DESTROYER, survived to be exhibited on Youtube, and I decided to review it under the latter title, to distance it a little from the 1962 MAGIC SWORD.

MAGICAL SWORD is far more in the tradition of Booth's predecessor George Melies, in that it depends on a lot of "magical tricks"-- superimposures, dissolves, "floating objects," et al. There is a plot of sorts, though it's hard to suss out given that (1) the short is only a little over two minutes long, and (2) it, like DESTROYER, has no title cards to explain what's going on.

The setup is much more interesting than the denouement. A knight, first seen standing on the ramparts of a castle, greets his lady-love. A malicious witch, complete with broom, intrudes, and threatens to steal the woman away. The knight prevents her, at which point the witch sits down on her broom and levitates away. The knight and his lady have no time to celebrate, for the next moment a huge ogre appears at the castle-wall and bears the damsel away. The actor playing the knight doesn't exactly communicate distress too well, for he folds his arms and stalks about, more like someone who just missed his train-ride than a devastated lover. However, a wand-wielding fairy-girl appears on the wall, and with a wave of her wand she gives the knight a "magical sword."

So far so good. The scene shifts to the short's only other locale: the witch's cave, complete with smoldering cauldron. The witch is still threatening the lady in some manner, but the sorceress sees the knight coming, so she changes the lady into a duplicate of herself. In a moment of presumably unintentional comedy, the knight walks by the two witches, and then does a double-take, as if to say, "isn't one of them my enemy?" He returns, drawing his sword. For some reason the witch then transforms herself into the likeness of a peasant girl, and then weird things start boiling out of the cauldton via superimposition: the head of the ogre, blowing smoke-rings, a couple of ghosts, and a death's head. When the visions disperse, the transformed lover prostrates herself before the knight, and he changes her back to her normal form when he merely touches her with his sword, rather than stabbing her. My best guess of the filmmaker's intention up to this point is that the witch wanted the knight to kill his beloved. To that end, she fed the knight some story about being an innocent kidnapped by the apparent witch, conjuring all the visions to support her story (though she certainly looks like she, the innocent peasant wench, is the one doing the conjuring).

The knight embraces his lover but carelessly drops his sword on the ground. The "peasant witch" picks it up. But before she can kill her enemies, the fairy shows up and transforms the witch into, of all things, a flying carpet. The lovers sit down on the carpet and it takes them home.  In a short coda, the lovers sit around an open-air dinner table celebrating with other people in Renaissance outfits. The fairy appears atop their table and the diners all rejoice in her beneficence as the short ends.

There's not much mythic content in this (literally) airy-fairy trifle, but the FX are good for the time. Though the main character, the knight, does not get to put an end to his enemy, I've stated in this essay that as long as the main hero or heroes demonstrate some puissance, the combative mode is not dispelled simply by the actions of supporting characters, to wit:

Posted by Gene Phillips at 12:21 PM
Email ThisBlogThis!Share to TwitterShare to FacebookShare to Pinterest
Labels: combative adventures, the marvelous