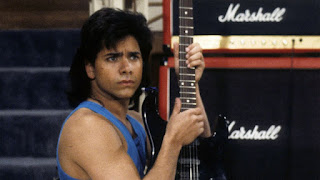 
NEVER TOO YOUNG TO DIE is a prime slice of 1980s cheese. But whereas its content is no better than the average dopey Chuck Norris flick, I tip my hat to director/co-writer Gil Bettman for laying on the cheese thickly. This is to say that, unlike most 1980s formula-films, Bettman-- by all accounts was just an undistinguished journeyman on most projects-- succeeds in keeping things visually interesting.

Of course, the film can't help but be risible when the hero is a young John Stamos, who would later gain fame for the "Full House" teleseries. To his credit, Stamos gives the simple role as much authority as possible, instead of playing it campy-- which may have been a temptation, if indeed one of the uncredited writers of NEVER was really Lorenzo Semple Jr. of "Batman" fame. As a line near the end of  the film tells viewers, Stamos's character-- saddled with the umbelievable name of "Lance Stargrove"-- is the person who's "never too young to die."

To the extent that the film is about anything, it's a typical story of a young man coming into his own by avenging the death of his father. If the film said anything about Lance's mother, I missed it, but the key aspect of the young fellow's life is his longtime estrangement from his father, Drew Stargrove. However, Drew has a perfectly sensible reason for keeping his distance: he's actually one of cinema's many James Bond knockoffs, which the film amply signals by having Drew played by ex-Bond George Lazenby. While Lance is busy developing his gymnast skills, Drew's getting killed trying to prevent a madman from poisoning the water supply of a major city.

The actor playing the madman is probably the only reason most viewers would watch. In keeping with the eighties attitude toward alternative lifestyles, villain "Velvet von Ragnar" is played as a flaming transexual by Kiss-band member Gene Simmons. The viewer never knows whether or not Velvet is a literal or figurative transexual, but in addition to his daring plan to extort cash with the dubious threat of water-poisoning, he commits numerous crimes against fashion, attired in blowsy dresses, a Cher wig and artificial, poisoned fingernails. Velvet personally kills Drew Stargrove, thus setting in motion the cycle of vengeance. 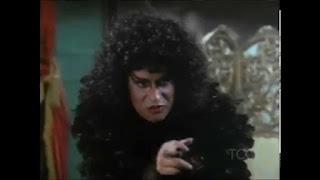 In due course Lance is informed of his paternal unit's death and is uncertain as to how to respond. He's particularly miffed when he checks out his father's house and finds it inhabited by sexy too-young-for-his-father Danja Deering (Vanity). For someone who doesn't seem to evince any memories of his mother, he seems pretty pissed by the implication that Danja might be his father's sex-partner, though over time the young woman denies being anything but Drew Stargrove's colleague. However, she also has a piece of software smuggled to her from Drew, and the evil Velvet Von Ragner-- who controls a horde of weirdly garbed punks straight out of a MAD MAX audition-- wants that software.

After that setup, most viewers can probably write the rest of the story themselves. Under attack by Velvet's thugs, Lance must team up with Danja to fight them off, eventually both making love to the lady spy and avenging his slain sire. (A deflected Oedipal situation, perhqps.) Lance, Danja and the late Drew at one time or another all use spy-gimmicks like mini-explosives so as to keep with Velvet, his freaky gang and his deadly fingernails. Though Simmons seems to have the most fun with his over-the-top role, Stamos gets the best line in a climactic battle with Velvet:

If nothing else, this popcorn movie succeeds in getting away with the sort of reactionary line that's entirely verboten in today's politically correct world.
Posted by Gene Phillips at 12:41 PM
Email ThisBlogThis!Share to TwitterShare to FacebookShare to Pinterest
Labels: combative adventures, diabolical devices (u), outre outfits (u), the uncanny