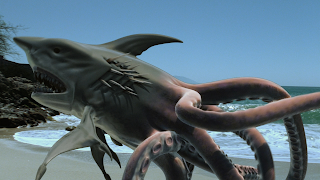 
What's better than MEGA SHARK VS. GIANT OCTOPUS? Well, to quote the old commercial, "You got your Megashark in my Giant Octopus!" This marketing strategy resulted in not one but three movies focused on a genetic creation of mad science, Sharktopus.

I've little to say about the first SHARKTOPUS. Once or twice the multi-tentacled CGI critter is a little imposing as he attacks sailboats or people on shore. apparently being a fully air-breathing entity even though all of his genetic material came from gill-bearing sea-creatures. One would think that such an outrageous concoction wouldn't prove especially trainable, but nutty scientist Nathan Sands (the ubiquitous Eric Roberts) actually creates the hybrid beast to sell to the U.S. military. When Sharktopus gets loose, Sands sends his overly obedient daughter Nicole to corral the creature, with the help of a hunky bodyguard, the heroically named Flynn. The two of them bond over shark-catching, which is perhaps an adequate way for Nicole to put her daddy issues to rest.

I don't rate most of these "ordinary people kill off colossal beasts" flicks as belonging to the combative mode. However, I was modestly impressed with the way heroic Flynn has to tag this big beast with an exploding dart, reminding me ever so slightly of a similar scene in IT CAME FROM BENEATH THE SEA.  So SHARKTOPUS gets over the threshold. 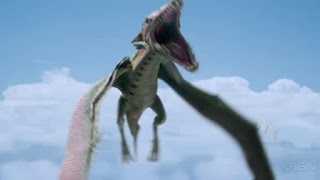 There's no problem making such a determination for SHARKTOPUS VS. PTERACUDA, since the main focus of the narrative is upon the battle of two huge hybrids, the latter a genetic cocktail taken from a pterosaur and a barracuda.

Sequel #1, written and directed by two new hands, does keep continuity with the first film. Although the original Sharktopus gets blown to hell, it leaves behind an egg-sac with an identical replica of itself. Lorena, an amateur marine biologist finds the baby freak and raises it to maturity at the seaquarium where she works for her uncle. Around the same time another mad scientist, Syme (Keith Carradine), works on another hybrid for the military, the Pterasaur, claiming that it will be a vast improvement over mere aerial technology.

Lorena tries to train the creature to be pacific, but when the Pterasaur gets loose, Syme needs a creature capable of giving the flying monster pause. Syme buys the Sharktopus from Lorena's uncle over her protests, and then the mad scientist-- who has but one bodyguard, another hunky guy-- tries to use Sharktopus for his own purposes. Naturally both monsters get loose and create havoc, with the most memorable scene going to Sharktopus's beheading of Conan O'Brien. Lorena, unlike the female lead in the previous film, starts out with a boyfriend, but when he gets killed by one of the monsters, it doesn't take her really long to bond with the hunky boyfriend against Syme.

Director Kevin O'Neill brings a little more panache to the struggles of the giant beasties, and writer Matt Yamashita concocts more passable incidents for the human people caught in the middle. Undoubtedly the filmmakers knew that there was going to be another iteration in the series, for while Pteracuda gets blasted, Sharktopus not only escapes death but apparently kills off the protagonists, despite having shown some affection for its "mother" earlier. 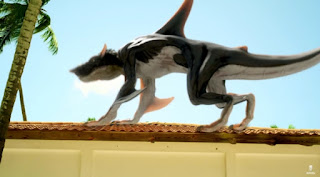 To date, the Shark-Octopus Opus ends with SHARKTOPUS VS. WHALEWOLF, easily the best of the three, though still quite poor on the mythicity scale. This time, writer Yamashita emphasized as many comedy elements as possible without actually making it a comedy, starting with the latest in the line of mad scientists, Doctor Rinehart (Catherine Oxenberg). Sporting a deliberately thick German accent and an apparent devotion to the ubermensch, Rinehart decides to experiment on a washed-up Dominican baseball-player and mutate him with DNA taken from an incongruous pair of mammals, whale and wolf.

While Rinehart is indulging in mad science for its own sake, local policewoman Nita Morales rides herd on a raffish boat-captain named Ray (Casper Van Dien), whom she obviously likes despite his irresponsibility and alcoholism. She drafts Ray and his sidekick Pablo to go hunting for the Sharktopus. The three of them encounter the monster but manage to get back to land without being eaten. However, around that time Rinehart's pet monster-- which usually acts more like a big dog than a wolf-- begins prowling for prey. If the film has a highlight, it's probably the point when Morales is summoned to break up a fight between Dominican gang-boys, and encounters both monsters at once, who immediately, like the gangs, start battling over "turf." To further complicate matters, Ray is indebted to a local voodoo priest, who wants Ray and Pablo to get hold of a piece of Sharktopus's heart so that the voodoo-man can gain control over the big beast.

Yamashita provides a lot of crazy business for both his protagonists and their monstrous foes, including some jokey behavior from the shark-creature. I've usually deemed both Van Dien and Oxenberg to be rather bland performers, but they really set their teeth in their respective colorful roles. Thanks to a better variety of business, the two of them are at least as much fun as the clashing colossi.
Posted by Gene Phillips at 3:48 PM

Email ThisBlogThis!Share to TwitterShare to FacebookShare to Pinterest
Labels: combative dramas, the marvelous