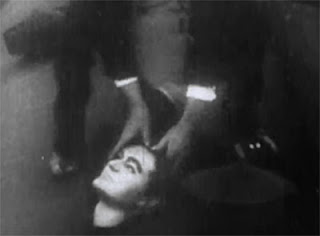 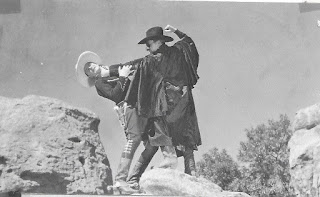 
A couple of online references claim that Mascot Studio's serial MYSTERY MOUNTAIN is a "remake" of the same studio's chapterplay from two years previous, HURRICANE EXPRESS. I find "remake" too strong a term. It's more like the later serial simply recycled some of the story-tropes that had been used by EXPRESS, though all of the tropes probably date back to the silent years. Both serials involve trains to some extent, though there's a lot more locomotive action in the 1932 serial, while the 1934 film is more concerned with horse-riding and stagecoach chases.  And both involve trains being assailed by a criminal conspiracy, headed by a mystery mastermind who can assume many identities through his use of disguises.

There are some important differences, too. EXPRESS is set in contemporary times, given the presence of both cars and planes of the 1930s. Hero Larry Baker (a pre-stardom John Wayne) is even a pilot, providing a small amount of air-action here and there, and the serial begins with what amounts to a two-minute paean to "the wheels of civilization," proceeding from stagecoachs to cars to speedboats, before settling on the train-line that's the main concern. MOUNTAIN, though not given a strong period setting, apparently takes place closer to the 19th century, given that there's an ongoing conflict between two companies: a stagecoach line and a railroad seeking to lay tracks around the "mystery mountain" of the title. Heroic railroad detective Ken Williams (Ken Maynard) drives neither cars nor planes, depending on his horse Tarzan for transportation. Williams is simply motivated by professional duty, while Baker seeks the villain for having slain Baker's father.

Another difference: the villain of EXPRESS, though he sports the fancy cognomen of "The Wrecker," is never seen in any sort of masked or cloaked manifestation. He depends entirely on his masks to keep his identity hidden, particularly the from viewer, until the final chapter's unveiling. In MOUNTAIN, "The Rattler" is also a master of disguise, but he affects a black slouch hat, a black cloaked outfit, and a patently false nose with a big mustache. Due to the false nose, the Rattler is probably one of the most ridiculous looking villains in American serials, though he's still resourceful enough to give the hero a good tussle or two, while the Wrecker depends a lot more on henchmen. The Rattler also uses certain "calling card" gimmicks-- artificial snakes, presumably made of wood or metal, that he throws like darts, and by which he sends messages to both allies and enemies. He seems to have no particular reason for this affectation, except that it arouses terror in his enemies' hearts, and his motive for plaguing both the railroad and the stagecoach-line has to do with unearthing a secret bounty from the mountain. The Wrecker's motive is simple revenge.

Both serials have a lot of thrilling set-pieces, though EXPRESS speeds ahead of MOUNTAIN in most respects. John Wayne and Ken Maynard both provide better-than-average heroics, though it should be no surprise that Wayne gives the more dynamic performance. However, MOUNTAIN has a better support-cast, ranging from feisty heroine Jane (Verna Hillie) to comedy relief Breezy (Syd Saylor), with the latter breaking the mold for serial-comics in actually being fairly funny.

But neither of the heroes have any metaphenomenal status. MYSTERY MOUNTAIN does have a costumed villain, but does HURRICANE EXPRESS fall into the category of the uncanny, just on the basis of his disguises?

In this essay on my companion blog, I considered whether or not a "man of many faces" could be said to register as having an "outre outfit:"

Now, being a simple "disguise expert" is not enough to mark a protagonist as belonging to what I've termed "the superhero idiom"... there are various "men of many faces" who do make my cut for belonging to the idiom, like the 1934 pulp-hero Secret Agent X, while others do not, like "Paris" from MISSION: IMPOSSIBLE.

I must admit that, even though the cloaked Rattler with his false nose is risible, the Wrecker's reticence makes him a little dull as a serial-fiend. Still, I've decided that his protean ability to masquerade as anyone-- even the hero-- does give  him the requisite aura of "strangeness" that I find necessary for an uncanny villain.

Besides, it gives me an excuse to induct John Wayne into the august company of actors belonging to 'the superhero idiom"-- an honor he'd probably have declined had he lived to hear about it.
Posted by Gene Phillips at 3:14 PM
Email ThisBlogThis!Share to TwitterShare to FacebookShare to Pinterest
Labels: combative adventures, outre outfits (u), superlative skills (u), the uncanny