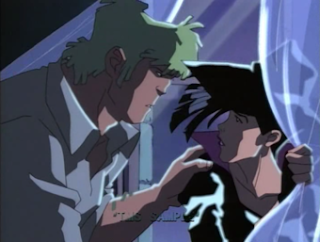 As I’ve mentioned in this ARCHETYPALARCHIVE essay, Cybersix, a comics-feature published in Italy but originated by two Argentinian creators, was considerably darker and more mature than most American crimefighters. At present there’s no official English translation, so in the U.S. the character is best known from this thirteen-episode teleseries. CYBERSIX did not succeed in the American market, which success might have brought about at least one more season of episodes. Being a Canadian-Japanese co-production, the short-lived series enjoyed greater circulation in Canada and in parts of Europe, though I would guess that the black-garbed heroine never became a recognizable icon worldwide.

Despite being animated in Japan, the show was notable for being remarkably faithful to the art-style of Carlos Meglia, as well as grounding the heroine’s adventures in a quasi-European milieu, the city of Meridiana. As in the comics, Cybersix is an artificially created superhuman, who has come to Meridiana to oppose the world-conquering schemes of Von Reichter, the evil geneticist who created her. The action scenes between the athletic heroine and the varied monsters cooked up by Von Reichter prove a match for any comparable scenes in the contemporaneous BATMAN teleseries, and the heroine receives ample assistance from a “sidekick,” a bio-engineered black panther named Dataseven, whose presence lends Cybersix an extra level of coolness. Many of the dramatic encounters register strongly, particularly between Cybersix and her confidante Lucas, whether she’s in her hyper-feminine “superhero” identity or posing in her “Clark Kent” civilian persona of male teacher Adrian Seidelman. The only visual aspects that don’t work especially well are the comedic ones, such as the overly cute street-kid Julian and the hyperkinetic son of Von Reichter, Jose. The latter, though generally working under the aegis of his father, is the main face of villainy on the series, and he’s characterized by endless and repetitive temper tantrums.

Since the animated TV show was aimed at “tweens,” there wasn’t room for the adult material from the comics feature. In the comic the heroine can only endure when she has access to a life-enhancing serum, “sustenance,” which she sucks out of the bodies of Von Reichter’s other genetic minions. Obviously, a TV cartoon could not show the character vampirically preying on people’s bodies, so the subject of sustenance is only mentioned in a couple of episodes, and Cybersix obtains it from canisters that her genetic “brethren” carry on their persons. Similarly, elements of sexuality had to be toned down. The series certainly does not mention that Cybersix acquired her costume from a prostitute, However, that history is signaled in the episode “Yashimoto Private Eye,” wherein the titular snoop visits a demimonde shop (run by a very masculine looking woman) and sees parts of Cybersix’s costume in the shop’s display-window. The romantic attraction between Cybersix and her human confidante Lucas begins strongly, when she visits him in his apartment seeking to obtain a missing canister of sustenance, but their attraction only occasionally plays into the other twelve episodes.

Only in the episode ‘Full Moon Fascination” does Cybersix have to deal with a sexual threat, as well as a frontal assault on her cross-dressing double identity. Glamorous lady teacher Elaine arrives at the school where “Adrian Seidelman” works with Lucas and puts the moves on the burly biologist, inciting Cybersix’s first bout with jealousy—a thing she can’t do anything about, without endangering her imposture as one of Lucas’s male buddies. Elaine also happens to be a product of Von Reichter’s lab, which means that she knows about Adrian’s other identity, and she can morph into the form of a scientifically bred werewolf. In the grand werewolf tradition, she can also infect others with her nature, a fate she’s not slow to visit upon Lucas. Cybersix must try to bring Lucas back to humanity, in part by reminding of their history as friends and potential lovers. A high point of the episode occurs when Cybersix visits Lucas’s apartment in an attempt to suss out his feelings for Elaine. Lucas, expecting Elaine for a date, rushes the heroine away, but when Elaine shows up, she instantly senses the presence of her competition, perhaps as much from woman’s intuition as from her werewolf senses.

Too often, episodes merely focus upon “the menace of the week,” and though the heroine shows a certain amount of alienation in her first episode, often she becomes a typical superhero, cracking jokes once a menace has been defeated. The mythicity of the episodes overall is no better than fair, but then, one could say the same of that baby-boomer adventure-toon classic, the original JONNY QUEST. And like QUEST, CYBERSIX boasts a really cool theme song jam-packed with adventurous snippets—though since the protagonist of CYBERSIX is female, the triumphal song (composed by Robbi Finkel) speaks to the heroine’s fervent desire for normal love amid her striving for pure survival.

In addition, the DVD collection boasts numerous strong commentaries regarding both the history of the comics-character and her animated avatar.

Posted by Gene Phillips at 2:39 PM
Email ThisBlogThis!Share to TwitterShare to FacebookShare to Pinterest
Labels: combative adventures, the marvelous