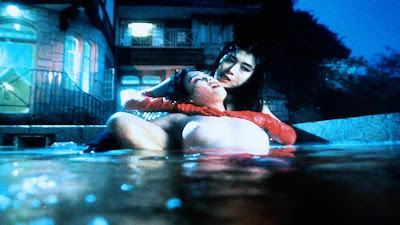 Even if Robert Altman hadn’t testified to the existence of the Hollywood combination pitch (“My new flick combines the action of Hit A with the pathos of Hit B”), any filmgoer could see how the movie industry frequently plays mix-and-match with elements of previous successes. NAKED KILLER certainly does this, and since it’s a Hong Kong Category III film, possibly some of its references are just quick toss-offs to keep the inundation of sex and violence from palling. The most proximate source for KILLER’s genesis would seem to be 1990’s LA FEMME NIKITA. Yet parts of the film also resonate with Hitchcock’s VERTIGO, with maybe a soupcon of BRINGING UP BABY added. And though KILLER could not have intended to imitate BASIC INSTINCT, since the two films came out in the same year, KILLER manages to outdo INSTINCT in terms of depicting a glamorous cabal of murderous lesbians.

The ”naked killer” of the title is seen in an opening scene, wherein professional assassin Princess (Carrie Ng) takes a shower in the home of her intended victim, and then kills him in a singularly bizarre way, shooting his balls and smashing his (larger) head. Yet Princess is not the star of the show, but the adversary of the main character. The next scene, in which Hong Kong cop Tinam (Simon Yam) shows up to investigate the gory murder. He tells his chief that he suspects that the killer was a woman, largely because of the ball-attack. His superior laughs off the suggestion, since a woman couldn’t be strong enough to pull off the head-smashing feat. (The idea that Princess is as strong as a man never comes up again.) For making dumb suggestions, Tinam is removed from the assassination case.

However, he’s on the scene in time for the debut of the movie’s real star, Kitty (Chingmy Yau). Kitty seems to be a background character when a young woman shows up at a hair-salon to rage at her erstwhile stylist-boyfriend for not acknowledging the child they have in common. Kitty then reveals that she’s the young woman’s friend and attacks the no-good boyfriend, stabbing him in the balls a few times. Tinam just happens to be nearby, so he intervenes and tries to arrest Kitty. Then he’s sidelined by his own VERTIGO-style psychological weakness. Because he accidentally shot his own brother, Tinam becomes nauseous whenever he tries to wield his gun. (I bet Sir Alfred wishes he would have thought of that one.) Kitty doesn’t know about Tinam’s hangup, but in a wacky manner reminiscent of a Howard Hawks comedy, she pursues the straight-arrow cop, blackmailing him into dating her. And in case writer-producer Wong Jing wasn’t clear with his dimestore Freudianism, Tinam—who has told a co-worker that he’s also been impotent since the shooting—finds that a dizzy dame is a remedy for what ails him. It’s particularly interesting that his impotence is cured by contact with a woman whom he’s seen stabbing another man’s genitalia.

However, an even more bizarre level of melodrama changes the course of Kitty’s life. We know nothing about her life beyond the fact that she’s the daughter of a poor food-stall owner, and that he’s married to a younger woman. A Triad gangster sleeps with Kitty’s slutty stepmother and kills Kitty’s old man when he protests. The daughter’s reaction makes her salon-incident seem calm and reasoned. Armed with a pistol she storms an office-building where the gangster works, killing him and a bunch of henchmen, for whom the audience feels nothing because they’re all just gangsters. But before Kitty can be slain by vengeful gunmen, she’s spirited away by a beautiful older woman, Sister Cindy.

Cindy is a professional assassin, and she was present at the office building with the intention of executing the man Kitty killed. Seeing promise in the young spitfire, Cindy persuades Kitty that she no longer has any future in ordinary life, and that becoming an assassin is her only clear career-choice. Cindy does tout herself as a sort of “noble assassin,” killing only men who deserve it, largely by using womanly wiles to lure men to their deaths. Yet to her credit, Cindy never pretends that her business is a walk in the park. She challenges Kitty to a martial arts match and trounces the young woman easily. More notably, Cindy locks Kitty in a basement with a crazed rapist and orders Cindy to kill the man if she ever wants out. Kitty, however, takes to the training avidly and accepts her new destiny. However, Cindy also warns Kitty about her “senior,” another female assassin whom Cindy trained—and this is none other than the rapacious Princess, who manages to knock off at least one more victim while she’s still in town.

Cindy fondles the young woman a few times in the process of instruction—and since both Princess and her main henchwoman Baby are said to be lesbians, it’s not hard to imagine that Cindy’s tutelage to Princess included lessons in Sapphic love, and that in time Kitty might receive the same attentions. But then an element from Kitty’s old life intrudes. Tinam stumbles across Kitty and instantly recognizes her, even though she’s been remodeled into a Hong Kong jetsetter. Kitty tries to keep Tinam at arm’s length, but she desires the psychologically wounded cop as much as he lusts after her. Cindy’s solution to the problem is simple: kill the cop.

However, Cindy and Kitty are spared the drama of a falling-out. Princess and Baby are hired to kill both of them, and Princess naturally slays her former mentor first, thus setting up Kitty to wreak bloody vengeance. Tinam joins Kitty in the final conflict, which gives him a “moment of truth” a la Jimmy Stewart’s character in VERTIGO. Of course, since it’s a HK action-movie, Tinam gets over his gun-fear really quickly and potshots about a dozen of Princess’s henchmen while Kitty obtains her vengeance and goes out with a bang.

A lot of romantic dramas focus on both of the enamored characters. However, just as Princess exists largely to give Kitty an adversary, Tinam doesn’t have that much of an existence outside of Kitty’s effect on him. That’s not to suggest that Kitty is a well-drawn character. She’s essentially a cartoon “vengeful woman,” constantly threatening men’s balls even before she becomes an assassin. That said, she and Tinan, despite being over-the-top types, succeed in embodying the sexual fears of their respective genders: rape for the woman, castration for the man. The same is true for all the lesbian assassins: their existence is as abstract and mythic as the Sith Lords of the STAR WARS franchise. KILLER is as wild as the wildest of the Category III thrillers, but it has a core of symbolic thought that transcends even the dumbest penis jokes.

The most visible metaphenomenal elements are the diabolical devices used by Cindy; these include an extending chain-weapon and an exploding chapeau. Oddly, though Princess kills her targets in bizarre ways, the only uncanny weapon she uses is poison lipstick. Perhaps fittingly, since Kitty is something of a “good” version of Princess, poison lipstick is also the only such weapon in Kitty’s arsenal. None of the actresses display superlative martial arts skills, though, and the only downside of the final conflict between Princess and Kitty is that the actresses are better at doing sex scenes than violent face-offs.

Though some “reformed assassins” may take on heroic stature, Kitty never really reforms, and so I’d still classify her as a villain. She just happens to be one of those villains whose destiny is to eradicate a far greater menace to society.

Posted by Gene Phillips at 3:04 PM
Email ThisBlogThis!Share to TwitterShare to FacebookShare to Pinterest
Labels: bizarre crimes and crimefighting (u), combative adventures, diabolical devices (u), the uncanny