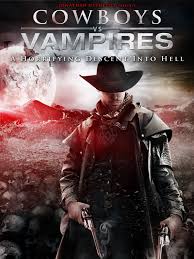 Even if these two projects didn’t start off with names evoking the big-budget COWBOYS VS. ALIENS, both ended up copying the title but, for once, not the exact content. For one thing, while the earlier film actually took place in the Old West, pitting Daniel Craig against extraterrestrials, these two low-budget flicks stayed in modern times—though the first one at least benefited from use of a famous movie-set used to film a lot of westerns.

Johnny Dust (Jasen Wade) is an actor who’s supposedly come to fame playing almost nothing but westerns. (That alone tells the viewer that the actor must live in some alternate world where westerns didn’t die out in the 1980s.) However, Johnny’s cinematic glory days are behind him, and now he pays the bills by enacting western-playlets for an Old West theme-park. Implicitly he’s in his forties, as is his ex-wife Sarah, by whom he has a teenaged daughter, Kim. Johnny continues to angle for a cinematic comeback, which brings a younger woman, Gloria, into his orbit. This incites Sarah’s jealousy, who refers to Gloria as a “kid.” (Age stats: at the time the Gloria-actress was pushing thirty, while the Sarah-actress was pushing fifty. Not exactly a huge transgression there.)

For some reason, a vampire decides to make the tourist trap his stomping-grounds, and proceeds to vampirize various locals, including Gloria. Writer-director Douglas Myers seems so preoccupied with his celebration of the West in the person of Johnny—who is, of course, not a real cowboy in any way—that he devotes nearly no attention to the vampires and their modus operandi. Eventually, amid Johnny’s family and career problems, he notices the presence of real bloodsuckers. Instead of heading for the hills, Johnny decides to play his role of “western hero” for real.

As of now VAMPIRES is Myers’ only movie credit. It’s nothing special, but it’s a better timewaster than a lot of other pedestrian efforts, if only thanks to actresses Angelique Celaya and Shannon Whirry.

COWBOYS VS. DINOSAURS doesn’t have even the pretense of a grand theme; it’s just another moldy tale of dinosaurs erupting from prehistoric slumber and menacing a small town full of contemporary Westerners. Like VAMPIRES, this tv-flick’s best appeal is not the phony CGI dinosaurs but a handful of cute girls. There are a couple of B-movie favorites in the cast—Eric Roberts and Vernon Wells—but none of the actors, well-known or obscure, have anything to work with but a lot of bland melodrama.

There’s one half-decent scene in which a married couple who don’t believe the reports of dinosaurs start joking around, with the husband playing “raptor” to his wife—only to have a real raptor chow down on both of them. However, I take points away for a scene in which a lady with science-chops explains how the defenders can blow up the dinos by igniting the methane in their systems—a revelation which means absolutely nothing, since the modern cowboys still end up shooting the big reptiles to death. I take away an extra point for gratuitous use of a JAWS-style heavy—making this subcombative movie literally pointless.

Posted by Gene Phillips at 12:34 PM
Email ThisBlogThis!Share to TwitterShare to FacebookShare to Pinterest
Labels: combative adventures, the marvelous