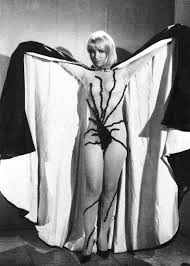 DIABOLICAL DOCTOR Z was the last of Jess Franco’s black-and-white movies, and one of the last of his “Euro-horror” films to be relatively free of the eroticism he began exploiting with 1967’s SUCCUBUS. The 1965 film, scripted by Franco under a pseudonym, boasts one of his more rigorous plots, resembling a cross between a low-budget Universal thriller from the forties and Cornell Woolrich’s 1940 novel THE BRIDE WORE BLACK.

As in many low-budget horror-flicks, revenge serves as the plot’s driving force. Aged Doctor Zimmer invents a machine that has some vague ability to suss out the nature of good and evil by sticking needles into people’s brains—sort of a mechanized version of Doctor Jekyll’s serum. Zimmer—a student of Doctor Orloff, a mad scientist from Franco’s earlier films—gets questioned about his device by a coterie of established physicians. They claim to have concerns about Zimmer having used the machine on human subjects (although no victims are seen or mentioned by name), and they hector Zimmer until he suffers a fatal stroke. His devoted daughter Irma (Mabel Karr) becomes obsessed with avenging her father’s death by slaying the principal mockers, and since she too is a scientist—the real “Doctor Z” of the title—she decides to use the mind-machine to do it.

Early horror-flicks are rife with mad scientists who turn innocents into catspaws to serve as assassins, but few of these pawns were female. If theories about Franco’s influence by Woolrich are correct, then the director decided to keep the general idea of a beauteous woman systematically killing victims, but by making her the weapon through which the scientist achieves her ends. Irma happens to be in a nightclub where she witnesses an erotic dance by a performer named Nadia (Estella Blain), who uses a stage-name, “Miss Death,” as part of a loose S&M routine. Franco tells the audience almost nothing about Nadia, for Irma transforms her into a killer almost as soon as the two cross paths. As viewers would see over the years, Franco cared little for evoking pity for the maltreated victim of evildoers. Once Miss Death has been changed by the machine, there are few if any signs of her attempting to regain her normal persona. She stalks down each of her designated targets, slaying them with her long, pointed fingernails—arguably Franco’s best touch, insofar as this death-method builds upon the socio-sexual fetish for women to possess long nails.

I don’t know if any prior horror-film had played with the potentially lesbian image of one woman mastering another, but Franco doesn’t do much with this possibility. Miss Death’s killings are interspersed with scenes of plodding cops trying to figure out what’s going on. In contrast to many later Franco films, though, here the cops do succeed in tracking down the malefactors to Irma Zimmer’s lab, so that the film concludes in a chaotic fight-scene and the defeat of the deadly doctor. 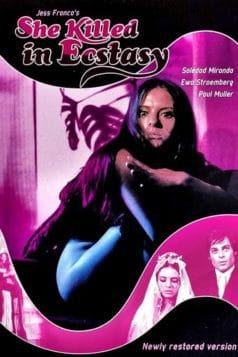 Diverting as DIABOLICAL is, one must admit that if Franco had continued to turn out films like this one for the remainder of his career, he probably would not have been as well-remembered. He benefited immensely from the liberalization of sexual depictions in the 1960s, so that all the things suggested in DIABOLICAL—lesbian dominance, sadism and masochism—could be jacked up with the addition of copious nudity and softcore sex. In addition, Franco displayed a minor genius for spotlighting gorgeous women as his central characters, building up their cinematic personas in a way one would never have seen in the humble grindhouse productions of the early sixties.

Since SHE KILLED IN ECSTACY (alternately titled MRS. HYDE) was produced roughly three years after Francois Truffaut’s 1968 adaptation of BRIDE WORE BLACK, Franco may have felt comfortable with increasing his movie’s similarity to Woolrich. Like BRIDE, ECSTACY concerns an obsessed woman seeking to kill a group of people she deems guilty of her lover’s demise, in place of a daughter seeking to avenge her dead father. Franco also dispenses with both the super-scientific brainwash-device and its victim seen in DIABOLICAL, and he gives both the avenger and her dead husband the extremely mundane name of “Johnson,” in contrast to the more exotic cognomens of “Nadia” and “Irma Zimmer.” Like the first Doctor Z, youthful Doctor Johnson comes up with a new scientific practice, though the script (at least as rendered in the subtitles of the German-language print I saw) doesn’t really explain Johnson’s radical new idea, except that it somehow involves embryos. But Johnson deeply believes that his experiment will help people—we know this because he repeats this belief over and over—and when four local German doctors—three males and a female—toss Johnson out of their ranks, the young man takes his life.

Mrs. Johnson (Soledad Miranda, in one of her few starring roles before her early and untimely death) decides to avenge him personally, principally by stalking down her husband’s persecutors and stabbing them. Mrs. Johnson is even less well-defined than Miss Death. Prior to her husband’s death, Franco tells the audience nothing about her past or her character, except that in a couple of scenes she’s seen in very revealing attire for no particular reason. (Perhaps Franco had some notion that she was or had been a stage performer like Miss Death?) Mrs. Johnson is nothing but a wind-up mechanism set up to seduce and slay, and the role is so drastically underwritten that it’s impossible to tell whether or not Miranda could have brought any character to the role. As it is, she stalks about, looking aggrieved until the script requires her to seduce someone. Her murder-scenes are poor imitations of the relatively cinematic slayings from DIABOLICAL, though of course they do include a lot more heaving flesh.

While SUCCUBUS is stuffed with phony avant-garde conceits, even that absurd farrago proved a little more compelling than this dull softcore effort.

Posted by Gene Phillips at 4:28 PM
Email ThisBlogThis!Share to TwitterShare to FacebookShare to Pinterest
Labels: perilous psychos (u), the marvelous, the uncanny