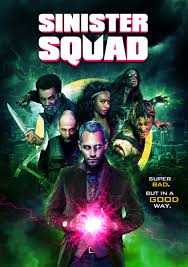 As bad as AVENGERS GRIMM was, with its unholy crossbreed of superheroes and fairy tales, SINISTER SQUAD—which uses some of the same characters-- manages new depths of rottenness. Presumably the title was inspired by the successful DC Comics film SUICIDE SQUAD, but with fairy-tale heavies taking the place of career supercriminals. GRIMM had already used one such folklore-meanie, Rumpelstiltskin, and he’s at the center of an evil plan that pits the forces of Death Himself against that Wonderland chick Alice. In response she brings together a band of evildoers to “fight fiends with fiends,” said band including Bluebeard, the Big Bad Wolf, and some lesser lights.

SHREK 3 did something a little like this as well, and as imperfect as that film was, even one minute of that animated adventure is more entertaining than the entirety of SQUAD. AVENGERS GRIMM was boring and predictable, but once or twice the writer seemed engaged with the idea of bringing badass princesses to life. Here the script tosses together its villains with no idea how to play them off one another, except to have them betray one another for random reasons.

All of the actors emote horribly, and there’s no opportunity to see whether they can fake-fight any better than the GRIMM princesses, because the script plays the thin plot more for scenes of grue than for action. There are some very short, one-sided battles—Bluebeard stabs the Wolf to death and Alice punches out a prisoner, but there’s none of the back-and-forth I associated with a combative film.

I watched AVENGERS GRIMM TIME WARS before viewing SQUAD, so if I have a slightly higher opinion of the (hopefully) final film in this godawful series, it’s not in reaction to SQUAD’s awfulness. TIME’s merits are still small ones. Since GRIMM couldn’t afford the bucks for big-budget superheroics, it tried to suggest grandeur tossing in a few minor name-actors and filming most of the scenes in empty streets and office buildings. TIME doesn’t attempt grandeur at all, and so the mise-en-scene looks closer to that of a low-budget softcore flick—which is certainly more appropriate.

One of TIME’s humble merits is that its writers chose to sponge off another successful DC Comics film, AQUAMAN. The Big Bad this time around is “Magda the Mad,” ruler of Atlantis, who walks around in a skin-tight costume like that of AQUAMAN’s Mera character—and for once, her evil motivation is slightly relatable. Long ago she kidnapped Sleeping Beauty’s Prince Charming, keeping the prince in durance vile for some years before he escaped. When Magda invades the surface world, her main motivation is unrequited love, and there’s a tiny bit of suspense as to whether she can manage to seduce the prince before he reunites with Sleeping Beauty.

The guy playing the price speaks some long lines of dialogue that must have required some practice, and he seems to have some fun with calling Atlantis both “abyssal” and “abysmal.” Not all of the “Avengers Grimm” (yes, they use that name once) surface to oppose Magda—only Sleeping Beauty, Snow White, and Red Riding Hood—but Alice from SINISTER SQUAD re-appears, this time joined by a thoroughly uninteresting version of the Mad Hatter. There are one or two quarter-decent fights, so TIME WARS registers as combative. Its main good points—a sexy villainess, a slightly more comprehensible plot—still don’t provide much relief from the overall tedium.