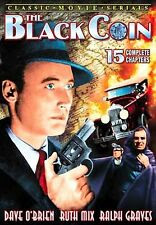 Though in 1936 there hadn’t been a silent serial for about eight years, THE BLACK COIN feels more like one of those creaky chapterplays. Though there certainly were important serials that lacked any metaphenomenal content—the original PERILS OF PAULINE being a case in point—the format certainly seemed to be at its best when it made use of extravagant fantasies, whether by adapting established works like Flash Gordon and Fu Manchu, or coming up with oddball originals like THE PHANTOM CREEPS and KING OF THE ROCKET MEN.

COIN combines two mundane plotlines: government agents investigating marine smuggling-operations, and a hunt for a fabulous treasure. The treasure-seekers can find their bounty if they assemble twelve silver coins, all of which have turned black with age (making one wonder why the title was singular rather than plural). Much of the serial involves heroes and villains seeking out different people who have one or more coins in their possession, in order to put together the ersatz treasure map. This trope quickly turns into a dead-end routine, in part because both heroes and villains are dull sticks. Two government agents, played by Ralph Graves and Ruth (daughter of Tom) Mix, add no excitement whatever, and while Dave O’Brien projects good machismo as central hero Terry Navarro, he’s just as dull with his “I’m gonna find the man who killed my dad” schtick.

COIN has only two points of interest. The first is a cool setup, as the viewer is informed that the twelve coins were originally Muslim currency from the time of the Crusades. The coins were then co-opted by Crusaders who stamped Christian symbols on the metal, and thus all Muslims view the coins as accursed. This might have been used to set up a continuing trope in which the coins might appear to be unlucky for anyone who owns them, but the script never exploits this potential. Thus the superstition about the coins registers as a naturalistic version of a culturally imposed "phantasmal figutation," since Muslims impute an evil nature to the currency.

The other interesting element is that COIN boasts one of the lamest “cliffhanger cheats” in the history of serials. At the end of the second chapter, seagoing thugs knock out Navarro, shove him into a sack, and then hurl him into the ocean, where hungry sharks lurk. But at the beginning of Chapter 3, Navarro’s sack somehow manages to stay afloat on the surface of the ocean—and not only do the thugs on the ship sail away without seeing this, a handy rescue-boat shows up to succor Navarro in jig time. Lame as this twist is, it’s at least a little more novel than the customary cheat in which the hero jumps out of the careening car before it goes over the cliff.