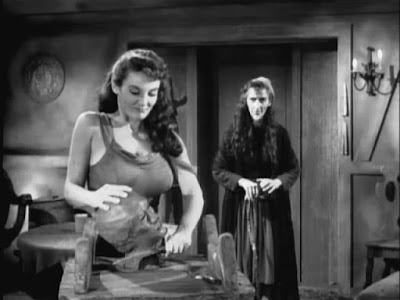 Of the thirty films produced and/or directed by Roger Corman from 1954 to 1959, most of his works fit the concept of the “exploitation movie,” a film that exploits the public’s interest in some gratifying topic—hot girls, gangsters, aliens, fast cars. THE UNDEAD, directed by Corman from a Charles Griffith-Mark Hanna script, doesn’t share the fast-and-furious appearance of the other fifties films. Yet UNDEAD came into being because Corman wanted a story that played to the public’s short-lived craze for reincarnation topics, brought on by the allegations of the “Bridey Murphy case.”

Griffith and Hanna started off with the tried-and-true overreaching experiment, as one scientist, Quintus, seeks to demonstrate to his mentor the truth of Quintus’s research into the Tibetan concepts of reincarnation. To prove his point, Quintus elicits the services of a young prostitute named Diana (Pamela Duncan)—not for her customary work, but to undergo a “past life regression” through hypnosis. The two scientists “witness” the regression only through the verbal testimony of their test subject. The film’s audience, though, gets the chance to watch directly what Diana’s spirit experiences, as she merges with Helene (also Duncan), a woman of the English Middle Ages. (The period is never very clear, though there are a few armored knights wandering about.)

It's axiomatic that no audience wants to watch a regression to a boring life. Griffith and Hanna responded to this imperative by stuffing the movie’s 75-minute run-time with enough colorful incidents to expand into a miniseries. Helene has been condemned to death for the general crime of being a witch, and the specific crime of having addled the wits of local gravedigger Smolkin (Mel Welles). To be sure, Smolkin never seems overly afflicted; he merely mutters a lot of goofy nursery-rhymes while going about his regular duties. But the real culprit—the one who cursed Smolkin and framed the innocent Helene—is Livia (Allison Hayes), a real witch whose magical arts stem from having sold her soul to Satan. By sentencing Helene to the headsman’s axe, Livia hopes to move in on Helene’s hunky boyfriend Pendragon (Richard Garland).

When the wandering spirit of Diana enters the body of Helene, Diana’s personality lingers only long enough to help Helene escape her prison, using a deception that characterizes the hooker’s stock in trade. After Helene’s escape, Diana ceases to be an active voice in the narrative, aside from continuing to keep the twentieth-century scientists up to date. Helene then gets shuttled around in assorted hiding-places—an inn, Smolkin’s corpse-wagon, and the cottage of a “good witch” named Meg Maud. (Meg is a curious concept foreign to the Middle Ages, in that she practices magic but doesn’t owe her soul to Satan, even though the Devil is seen to be a real entity in the story.) Meanwhile Livia tries to put the moves on Pendragon. She doesn’t win his heart, but she does get a head, chopping off an innkeeper’s pate as a sacrifice to her Satanic majesty.

Back in the twentieth century, Quintus becomes belatedly concerned that because Helene seems to have escaped her fate, the continuum of time may be violated, which may cause Diana to cease to exist. But apparently Quintus learned a lot of skills in Tibet, for he’s able to tap into Diana's “psychic hotline” connecting Diana in order to send his own spirit back to Helene’s time and place. Further, once there, Quintus doesn’t enter anyone else’s body, but magicks up a form identical to his own, complete with contemporaneous garments. His purpose is to talk Helene into giving in to her dolorous fate, but he also talks Pendragon out of selling his soul at a witch’s sabbath (where, incidentally, a threesome of witches performs an anachronistic dance-routine). Satan puts in a personal appearance, becoming irked at being cheated of a new soul, and not the least bit surprised by the intrusion of a traveler from another century. More incidents transpire, not least the good and bad witches squaring off, but Helene is still the focus of the action. Quintus successfully talks the young woman into giving up her life to an unjust destiny to save all of her descendants. Unfortunately the researcher goofs, for Helene’s death severs the connection to twentieth-century Diana—and without that connection, Quintus remains stuck in the Middle Ages. Satan is highly amused by this turn of events, predicting that Quintus will live his life in this time period, and that when he dies, he Satan will somehow claim his due—harvesting Quintus for the sin of hubris, perhaps.

Despite the breathless piling-on of incidents, and the lack of characters’ backstories, UNDEAD is certainly never boring. Though the plot is an assemblage of contrivances, Griffith and Hanna give all of the actors some good moments—not just the showier roles like those of Livia and Smolkin, but even Pendragon’s straight-arrow character. Even without knowing the precise conditions of the film’s production—it was filmed in six days in a remodeled supermarket—Corman’s constricted scenarios may make one imagine the actors hurriedly rushing around their five or six sets to say their lines. Duncan’s central character of Helene particularly transcends the circumstances of filming, and her self-renunciation scene works, especially when it’s supported by Diana’s pledge to get her life together in modern times.

The main downside of the Griffith-Hanna script is that when one stops to think about their ramshackle concept of reincarnation, the movie falls apart. In fiction there are two principal forms that reincarnation takes: that of the “venerable ancestor” and that of the “complete stranger.” From what I can tell, the Bridey Murphy case was based in the latter concept: that of a modern woman who re-experienced an earlier life with an Irish woman of no relation to her—and at first glance, this seems to be the model for Griffith and Hanna, since no one ever claims that there’s a familial relation between Diana and Helene. However, implicit in the “complete stranger” scenario is the idea that one human’s spirit makes some cosmic transition to a later vessel. If that’s the case, then it doesn’t matter to the later spirit whether or not the earlier human perishes at one time or another.

However, in the “venerable ancestor” paradigm, the idea is that of mucking with family lines is explicit. If Michael J. Fox’s character in BACK TO THE FUTURE isn’t conceived by the parents he had in the normal timeline, he ceases to exist. Something like this might transpire in UNDEAD if the opposite outcome had been sought—say, that Helene had to be saved from execution so that she would continue the line of which Diana was a member. But while it would be logical to claim that Diana and a bunch of other people would cease to exist if Helene were killed before giving birth to a descendant, there’s no logic in saying that a bunch of unrelated human beings would cease to be because Helene dies without issue. In conclusion, UNDEAD is like a lot of time-travel tales: entertaining as long as one doesn’t try to unravel the supposed paradox-threads.

ADDENDUM: I will belatedly note that although Quintus thinks time will be put out of joint if Helene lives, he doesn't seem concerned that he apparently changes history by interfering with Pendragon when he starts to sell his soul to Satan. Pre=Quintus, what happened to Pendragon and Livia? Given her charms, she could have easily seduced him afterward. They would not have married in a church, but Livia could have borne Pendragon a child-- a potential that ends in the adjusted timeline, since Pendragon kills her.

Posted by Gene Phillips at 3:58 PM
Email ThisBlogThis!Share to TwitterShare to FacebookShare to Pinterest
Labels: the marvelous