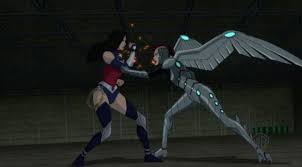 Most of DC’s DTV releases are at best serviceable time-killers, and even the duds, like JUSTICE LEAGUE VS.FATAL FIVE, at least have some decent action set-pieces. But the WONDER WOMAN BLOODLINES video lacks even a bracing fight-scene.

Of course, the Wonder Woman franchise started out by having more to recommend it than fast action. Whatever a given viewer might think of William Moulton Marston’s conception—that of an Amazon princess playing superheroine while attempting to reform the male chauvinist ways of “man’s world”— there’s no question that he did produce some standout stories on that theme, as did some (though not many) of the comics-creators following in his wake. The Amazing Amazon didn’t enjoy nearly as much success in other media, but prior to the successful live-action adaptation, DC’s animated 2009 WONDER WOMAN video at least touched on most of the salient aspects of the Amazonian mythology.

In BLOODLINES scripter Mairghread Scott crafts a new debut for the Hellenic heroine, but she manages to get everything about the Amazon’s origin wrong. Most retellings build on the 1941 original: U.S. pilot Steve Trevor crashing on Paradise Island and falling in love with Diana, princess of the Amazons. Often the plane-crash is caused by inimical forces, and Diana, ruled by both general altruism and personal affection, decides to become a heroic crusader to defeat those forces. I’ve not read every retelling of the WW origin. But I tend to suspect Scott is alone in having Trevor’s plane besieged by a particular group of inimical forces—in this case, the Parademons of the world Apokolips—who never appear in the rest of the video. Thus, even though these demons are supposedly the reason Diana chooses to leave her ancestral home, this ostensible menace is dropped in favor of a bunch of supervillains from the heroine’s far-ranging comics-history.

In most retellings, Diana leaves her home with the blessing of her mother Hippolyta, who stresses the greater world’s need for an Amazon hero. But in Scott’s telling, all of the Amazons but Diana want nothing to do with man’s world, and Diana leaves over the violent protests of her mother. Possibly Scott thought this would be a new twist on an old formula. But I for one knew that this falling-out would prove a dramatic flop, and indeed, Hippolyta has a simplistic reconciliation with her daughter by story’s end.

While waiting for the never-seen-again inimical forces, Wonder Woman becomes a superheroine with vague ties to the U.S. government, during which time she meets many of her standard enemies: Giganta, Doctor Cyber, Doctor Poison and the Cheetah. (The group is styled “Villainy Inc.” after a similar organization created by Marston in Wonder Woman’s original run.) Scott makes none of these venerable villains interesting in terms of characterization or modus operandi. Drawing on the 1980s comics by George Perez, duck-out-of-water Diana stays for a time with Classical scholar Julia Kapatelos and her daughter Vanessa. This family drama leads to yet another hoary cliché: when Wonder Woman fails to prevent Julia from being slain by Cyber’s soldiers, Vanessa blames the Amazon. In addition to other crimes, Vanessa consents to a scientific experiment by Cyber, the result transforming the bereaved girl into yet another villain, the Silver Swan. The Swan, originally another character in her comics-debut, is at least a little more visually impressive than the other villains, but that’s not saying much, and her dramatic arc is just as tedious as the Diana-Hippolyta conflict.

As if Scott’s script was not already a case of “too many crooks spoil the broth,” Cyber’s ultimate plan involves reviving the mythic maiden Medusa. Yet Scott can’t be bothered with expounding upon the heroine’s relation to the ancient Greek gods, so the fact that a magical being like Medusa even exists at all comes out of left field. This Medusa is patterned like one of the titular behemoths of CLASH OF THE TITANS, in that she’s a colossus in addition to being able to change people to stone. Because Medusa bears some old grudge against the Amazons, the fight against the petrifying giantess gives Diana the chance to save the day on Paradise Island and thus make amends with her mother.

Though some viewers didn’t like Steve Trevor in the 2009 animated video, since he was portrayed as something of a player, at least that was more of an identity than the neutered zero posing as Trevor in this offering. The most I can say for BLOODLINES is that some of the voice-work is good, even though the script is abominable.

Posted by Gene Phillips at 11:16 AM
Email ThisBlogThis!Share to TwitterShare to FacebookShare to Pinterest
Labels: combative adventures, the marvelous