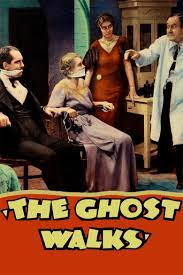 For the most part THE GHOST WALKS is just another ccokie-cutter “old dark house” film, possibly a little better filmed than many others, and the last metaphenomenal film by journeyman director Frank R. Strayer. GHOST was one of several films Strayer directed following the 1933 VAMPIRE BAT, and there’s no indication that Strayer regarded his last foray into horror as anything special.

Unlike VAMPIRE BAT, GHOST boasts no big names, either from the world of mainstream films (Melvyn Douglas) or from the world of horror (Lionel Atwill), and so there’s not a lot of spot-the-actor fun here. I recognized only the names June Collyet and Johnny Arthur, the latter given a degree of immortality by dint of playing a nasty Japanese villain in the serial MASKED MARVEL.

The setup involves a playwright and his assistant (Arthur, playing a somewhat sissified character) who take refuge at the mansion of the playwright’s friend. Some of the occupants act strangely, but they’re revealed to be actors playing roles for the playwright’s benefit (a possible borrowing from SEVENKEYS FROM BALDPATE). No one pretends to be the “ghost” of the title, though one actress claims to be a medium in touch with spirits. But when people start disappearing, it’s not a phantom who’s responsible, but a madman from a local asylum. The loony is convinced that he’s a doctor who can perform facelifts on his unwilling subjects. This might have provided some grotesque moments, were the filmmakers not playing the film for comedy.

One review claims that Arthur’s character would have been understood as gay. Though there are various references to homosexuality scattered throughout 1930s films, I think the character is just meant to be a standard comedy-relief who overreacts to the semi-spooky events.

Posted by Gene Phillips at 11:27 AM
Email ThisBlogThis!Share to TwitterShare to FacebookShare to Pinterest
Labels: perilous psychos (u), phantasmal figurations (u), the uncanny