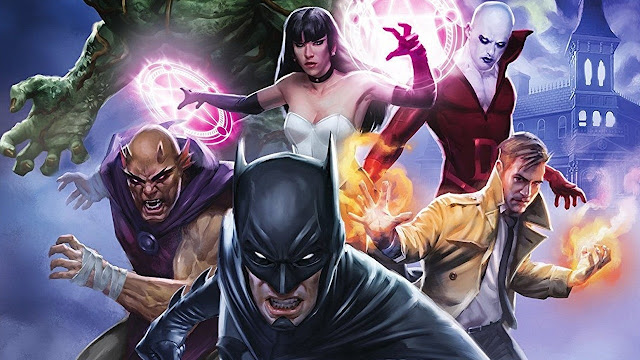 Prior to watching the JUSTICE LEAGUE DARK DVD the first time, I read the first six issues of the comic book on which it was based. Years later, I recall nothing about the comic book or its premise except that it didn't impress me. In contrast, I did rather like the DARK video-- which uses a different lineup of supernatural avengers-- but didn't get around to reviewing it until now, since I decided to give a look at all of the "Darkseid War" DCAU installments.

Violent demon possessions around the world lead the regular Justice League to suspect an occult menace, and Batman, the League's most bankable member, gets tasked with forming a "Justice League" of magic-users to handle the matter.  This legion consists of Zatanna (not yet a JLA member in this universe), Jason Blood and his powerful alter ego The Demon, the spectral Deadman, and (getting most of the narrative attention) raffish thaumaturge John Constantine. Swamp Thing, though shown on the DVD cover, is brought in as a contributing "guest star," not really any more a part of the group than minor guest-stars like Superman and Wonder Woman. Additionally, minor character Black Orchid also appears, as well as a version of DC's "House of Mystery."

Constantine's centrality is emphasized by the fact that, in order to suss out the cause of the possessions, the group must seek out one of the Brit wizard's old magical colleagues, Ritchie. The investigation gives the dark-leaguers the info that their main foe is an ancient magician named Destiny-- loosely based on classic JLA foe "Doctor Destiny"-- and they further learn that Destiny may be tied in with a previously established JLA foe, Felix Faust. This leads to a big battle royale between Faust and the dark-leaguers, but the Faust trail turns cold and the heroes are forced to find the real villain behind Destiny's malicious magic.

The Jason Blood/Demon backstory gets a decent "B-plot," but all of the other heroes largely take a back seat to Constantine. It's problematic as to whether a PG-13 cartoon is sufficient to translate the ironic appeal of this R-rated character, but DARK handles the cocky anti-hero magician well enough. The video's main problem is its simple structure: once Faust is revealed to be a red herring, the identity of Destiny's real confederate becomes obvious, and that character sustains no interest. Only occasionally does the script manage to get across the peculiar appeal of the occult, which I believe DC Comics usually channels better than does their competitor Marvel, and that's the main reason I give this a "fair" rating. It does help my assessment that the film's version of the Felix Faust is made into far more of a badass than the one in many of the comics, so that may have swayed my opinion somewhat.

Posted by Gene Phillips at 3:47 PM
Email ThisBlogThis!Share to TwitterShare to FacebookShare to Pinterest
Labels: combative adventures, the marvelous