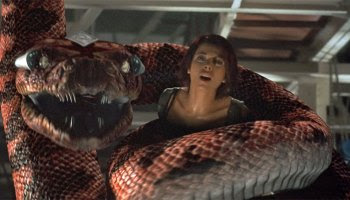 Though I review a fair number of "colossal critter films" here, my main reason for bothering with a time-killer like PYTHON is because its producers wove its continuity and that of another TV-flick, BOA, into the 2004 crossover-film BOA VS. PYTHON-- both of which I loosely plan to get around to.
PYTHON is the usual mix of bland characters bouncing off one another with their quarrels and love lives until they become aware of a giant, genetically mutated snake on the loose in their small American town. While the snake gobbles up various humans with relish, a unit of NSA agents try to kill it without undue publicity. For some reason there just happens to be a snake-expert in town, Doctor Rudolph (Robert Englund), and he lectures the NSA guys on the snake's powers as a "pure killing machine." This led me to hope for a major battle-scene between the python and the armed agents, but perhaps predictably, the hunted takes out the hunters rather easily. This naturally leaves the ordinary folk the task of finding some last-ditch means of executing the predacious serpent.
The only memorable melodrama here is the rivalry between two local swains over a local girl, and one of the guys is a deputy investigating the mysterious deaths. In the latter role William Zabka gives the slim characterization his all, and he and Englund provide the only moments of thespian intensity. The big snake is better animated than many lesser CGI efforts.
Posted by Gene Phillips at 2:47 PM
Email ThisBlogThis!Share to TwitterShare to FacebookShare to Pinterest
Labels: the marvelous