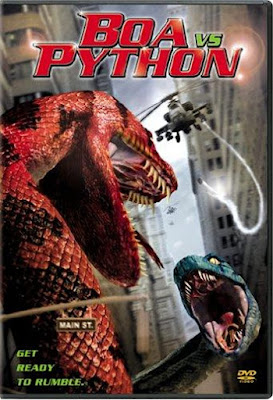 Most of the American-made mashups of "colossal critters" don't involve combining two or more monsters who had their own features, after the fashion of such kaiju-characters as Godzilla, Rodan and Mothra. DINOCROC VS. SUPERGATOR, while not very memorable for any other reason, was at least preceded by one feature apiece for the two reptilian rowdies.

BOA VS. PYTHON at first looks to be following that general model, since the same production company had brought forth both PYTHON in 2000 and BOA in 2002. The starring creatures get killed at each film's conclusion, but death has never been a barrier to the resurrection of profitable monsters. The original Godzilla perishes at the end of his 1954 debut. The Big G who then appears in GODZILLA RAIDS AGAIN, and who later chalks up some twenty-thirty films later, is supposed to be another "Godzilla-saurus" of the same species. Thus it would have been easy for the makers of BOA VS. PYTHON to have a new pair of monsters of the same species as the originals.

Instead, the producers only followed half the formula. In the original PYTHON, the big beastie was a genetically bred monstrosity, and VS. suggests that some laboratory out there has once more produced another in the series. At least, that's the logical conclusion when a ruthless millionaire promoter has a titanic python shipped into the U.S. from parts unknown, for the purpose of organizing python-hunts for rich assholes. FBI agent Sharpe investigates when the python breaks loose from its transport and kills some people, and some of his dialogue suggests that he's familiar with the events of PYTHON. Thus VS. is in continuity with PYTHON.

However, in the original BOA, the colossal critter was a gigantic prehistoric snake who made things hot for the prisoners in an Antarctic prison. The boa of VS., while still pretty big, has been nurtured in a laboratory, possibly with genetic enhancement as well.

Agent Sharpe somehow finds out about the big boa, cared for a scientist named Emmett (David "STARGATE TV show" Hewlett), and the agent decides that he can use the boa to hunt the python. But first the boa has to be further enhanced with tracking technology, garnered from yet another scientist, Dr. Bonds (Jaime "SON OF THE BEACH" Bergman). Though there's a hint of romance between the two name-actors, they're mostly there to exchange bits of information about matters herpetological.

The simple plot is improved by a few touches of humor, such as the opening, in which the promoter attends a match between a pair of wresters nicknamed "Boa" and "Python." There's also a few moments of female nudity, which one doesn't usually see in such films-- though the most attention-getting sex-scene in VS. takes place off-camera, when the male python gets it on with the female boa. Later the boa lays eggs, which led me to check out the actual possibility of such constrictors interbreeding-- and as it happens, it does seem to be possible. But Papa Snake eats his young, and Mama Snake has a problem with that, thus paving the way for a modestly animated colossal critter battle at the climax.

Posted by Gene Phillips at 1:23 PM
Email ThisBlogThis!Share to TwitterShare to FacebookShare to Pinterest
Labels: combative dramas, the marvelous