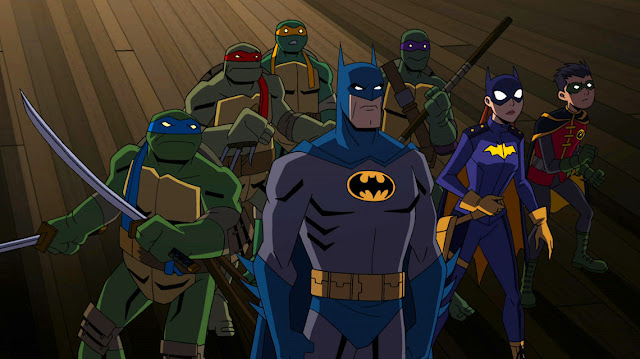 I have not read the crossover-comic on which this video is based, but a quick perusal of the comic's writeup on Wiki suggests that the DVD follows the broad outlines of the comic's plot. The Ninja Turtles and their venerable foe The Shredder end up carrying their grudge fight from the Turtles' version of New York into Baman's Gotham. After the inevitable "fight because of a misunderstanding," Batman, two of his Bat-Brood, and the four terrapin terrors team up against Shredder, his ally Ra's Al Ghul, and most of Batman's regular rogues' gallery. The heroes win and everybody goes back to their normal worlds.

I suspect that the nature of the video may have encouraged its scripters to really lay on the jokes with a vengeance. The original TURTLES comics, for all the absurdity of the premise, pursued their course of "serious funny animals" in the style of Frank Miller with only minimal humor as I recall. However, all of the cartoon and live-action adaptations played up the wild and crazy aspects of the four Turtle brothers, and for better or worse, most people think of the characters as dominated by comedy.

But in the case of BATMAN/TURTLES the video, it's a welcome change from all the super-serious Batman DTV flicks. Batman of course remains bereft of a sense of humor, but Batgirl and one version of Robin are around to make certain that Michelangelo doesn't get all the funny lines. But the action-scenes are given good attention as well, particularly the early face-off between the Caped Crusader and the ninja teenagers. A long mid-film struggle pits the good guys against most of Batman's enemies, all mutated by the all-purpose mutagen, "the Ooze," brought to Gotham by the evil Shredder, and most of this sequence is strong, though I could have lived without seeing Mister Freeze mutated into a polar bear. This sequence, with its extensions of the Bat-rogues, is also the main reason that the video gets a "fair" mythicity rating-- although it of passing interest to hear Ra's Al Ghul make an arch comment on Batman's tendency to induct "children" into his crusade, given that the Turtles are, like Robin and Batgirl, more or less adolescents.

In contrast to many Bat-films, this one captures some of the innocent absurdities that once dominated both the Batman feature and comic books generally.

Posted by Gene Phillips at 4:16 PM
Email ThisBlogThis!Share to TwitterShare to FacebookShare to Pinterest
Labels: combative adventures, the marvelous