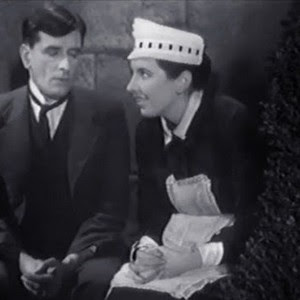 THE BLACK ABBOT apparently borrowed the title of a 1926 Edgar Wallace thriller, and maybe the base idea of a mystery taking place in a mansion adjacent to a long defunct monastery. The book is said to deal with a ghost of a dead abbot who haunts the premises, protecting a lost treasure, but the ghost is actually the creation of thieves.

Writeups for this "quota quickie" claim that the abbot's ghost in this flick is also an illusion foisted on the mansion-dwellers by crooks. But as I watched the film, I never saw an actual spectre, real or phony. Many characters in the ensemble-- the members of the rich family, their colleagues, and two young swains courting the family's young heiress-- have a few moments where they *think* they've seen a ghost, but unless I blinked at the wrong moment, they never actually see anything. I suppose I would still consider this a phantasmal figuration, albeit one created by the victims, not unlike the superstitions ruling many of the characters in WEIRD WOMAN.

There are some dastards hiding on the grounds, but their purpose is not to search for treasure. Instead, they kidnap the head of the rich household and hold him in the monastery. The family members and their friends bring in the constabulary, while they also get some advice from an American guest who may know more about the affair than he claims.

There's nothing fresh about the story, but I was very impressed with director George Cooper's handling of the actors. In contrast to many "old dark house" flicks, Cooper uses a lot of closeups to emphasize the emoting of the players. The director's techniques must have worked pretty well on me, given that I wasn't familiar with any of the British thespians, or even the one American guy, character actor Ben Welden. And though the film wasn't very funny, I liked the delivery of the two comedy-relief characters, a maid and butler played respectively by Davina Craig and the suspiciously named "Earl Grey." There's also a minor conflict in which the heiress chooses one swain over the other, and then begins to wonder if he's in on the kidnapping job. I don't know any of Cooper's work except another old-dark-house show, 1933's THE SHADOW, but as my review makes clear, I found that one underwhelming.

Posted by Gene Phillips at 4:29 PM
Email ThisBlogThis!Share to TwitterShare to FacebookShare to Pinterest
Labels: phantasmal figurations (u), the uncanny