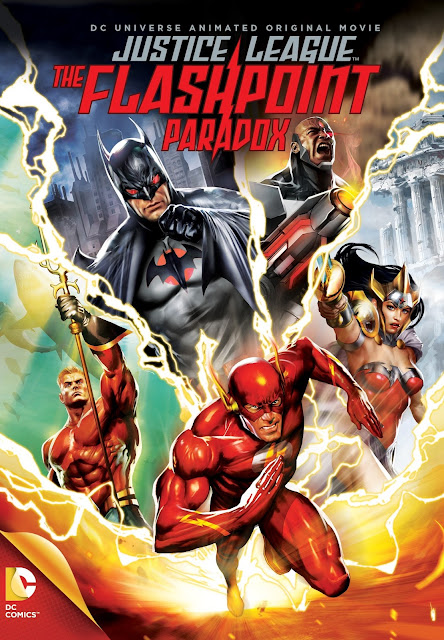 When I saw FLASHPOINT years ago, I wasn't aware at the time that it launched the franchise known as the "DC Animated Movie Universe," which is a subset of all of the (mostly if not entirely) direct-to-video animated films featuring DC Comics characters, a set of movies dating back at least to 2007. I don't remember whether or not I read the original comic on which the story was based, but the video is said to be true to the source, which also inspired one past adaptation in episodes of the FLASH teleseries and may figure into a future live-action movie if those plans bear fruit-- all of which means that the original story impressed others more than it did me.

In essence, FLASHPOINT is just another iteration of the "butterfly effect" of time-alteration, as put forth in Ray Bradbury's 1952 short story "A Sound of Thunder." In most of these "time gone wrong" stories, someone or something alters the established course of history, almost always making things many times worse than in the original history. Flash, the central hero of this Justice League tale, accidentally causes a "time boom" with the exercise of his super-speed. As his perpetual enemy Professor Zoom explains, this phenomenon has the same effect as a sonic boom, disordering the entire timeline. Thus, one day Flash, in his secret ID of Barry Allen, wakes up to a word that at first seems only different in small, personal ways-- his dead mother is alive, his former wife is married to someone else. But the personal expands into the cosmic. The whole world is now ravaged by an insane war between Wonder Woman's Amazons and Aquaman's Atlanteans. Many of Flash's old comrades in this reality are radically changed as well. From the instant of his landing on Earth, baby Kal-El has been confined to a military lab for study, rather than becoming the hero Superman. Batman still exists, but Bruce Wayne was slain in Crime Alley, while it's his mourning father Thomas Wayne who became a Robin-less Caped Crusader.

The voice actors do a creditable job with this downbeat drivel, particularly Justin Chambers as Flash and Kevin McKidd as Thomas Wayne. But though Jim Krieg has some good scripts to his credit, he can't do anything to relieve the thudding tedium of this really bad alternate history, which I tend to lay at the door of the original comics-writer. Possibly the worst conception is that the war between Amazons and Atlanteans doesn't start from any believable sociological cause, but as a result of a romantic grudge: married Aquaman has an affair with Wonder Woman, and his wife Mera gets killed by the Amazon Princess during a confrontation. I assume the original writer thought this was tragic; I just thought it stupid. There's never any real psychological substance behind the characters' actions, not even in Flash's realization that he must let his mother die to save the universe, in marked contrast to a similar trope in the classic STAR TREK episode CITY ON THE EDGE OF FOREVER.

The only virtue of this overbaked twaddle is that its success led to other, better entries in the DC Animated Universe.

Posted by Gene Phillips at 2:11 PM
Email ThisBlogThis!Share to TwitterShare to FacebookShare to Pinterest
Labels: combative adventures, the marvelous