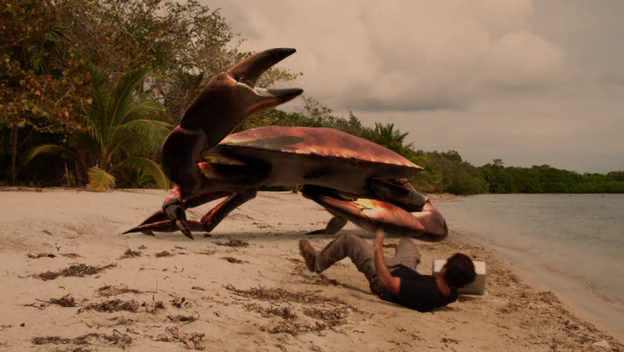 I've seen worse mockbusters than this rip-off of the then-current big-studio film PRINCE OF PERSIA. Still, its only good scene appears early on, and it's all downhill from there.

Adrian Sinbad (Patrick Muldoon) owns an oil company, but at heart he's an adventurer like the famous Sinbad from which he's implicitly descended. When Adrian gets news that his oil rig in the Indian Ocean has been destroyed by Somali pirates, the young millionaire doesn't get on the phone with some mercenary group. He and his aides fly a helicopter out to the area, apparently with the notion of taking on the pirates themselves. A storm downs the copter, and though most of the occupants make it to an uncharted isle, Adrian is alone on the beach when he has a close encounter of the crustacean kind. He drives off the giant crab with pistol-fire, but after it departs, the flustered fellow starts yelling "CRAB" at the top of his lungs. And as if to mock him for being the only witness to the big beastie, along comes one of his aides, who immediately thinks he's imagining things.

After that, though, the film becomes a tired rehash of the 1961 MYSTERIOUS ISLAND, with absolutely no consistency about the nature of the bizarre beings inhabiting the island, which include a Cyclops, some sirens, a demon, some giant birds called Rocs, and a giant turtle (whose back provides one of the two islands on which Adrian has his adventure). There's an extremely vague explanation for all the weird entities about alien crystals, though one character claims that there's a spiritual being who's unleashed all the chaos in response to the oil spill.

The aforementioned character is Loa (Sara Desage), who first appears to Adrian as a scantily-clad barbarian girl with a spear. It's soon revealed, though, that Loa is actually a modern girl who got stranded on the isle when she and her father came looking for a legendary utopian civilization. Somehow Loa became separated from her father, so she took up wearing barbarian-gear and painting her face for no particular reason. Oh, and when she and Adrian do find her lost father, not only is he ruling over the lost utopia, he calls her "Ana," not "Loa." Possibly the writers amalgamated two unrelated characters but didn't bother to smooth out the rough patches, for Loa also talks like an oracle half the time, claiming that Adrian must fulfill a prophecy to save the world from the supernatural thing-- maybe a creation of the alien crystals, like all the other critters? But even that rationale is probably giving the matter more thought than the writers did.

Loa shows more toughness than Adrian as she helps him fight off the Sirens, but all the characters are pretty worthless-- like the film itself.

Posted by Gene Phillips at 2:29 PM
Email ThisBlogThis!Share to TwitterShare to FacebookShare to Pinterest
Labels: combative adventures, the marvelous