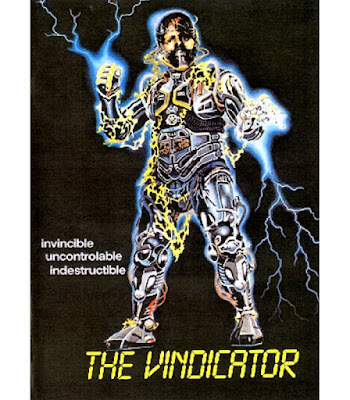 I'm amazed to see a criticism of this lively film-- sometimes billed as FRANKENSTEIN '88-- as being "unevenly paced." It may be nothing but a good formula-film, but something's happening onscreen every moment, with a very clear arc for each of the many characters (except for a teenaged character who gets knocked off late in the film, mistakenly cited on Wiki as the daughter of the main couple).

Said main couple are Carl Lehman (David McIlwraith) and his pregnant wife Lauren (Teri Austin). Carl works for ARC, an aerospace research institute headed by a corrupt manipulator named Alex Whyte (Richard Cox). Carl and Whyte butt heads because Whyte's been siphoning off institute funds from Carl's projects in order to pay for a secret project. When Carl gives Whyte static about an investigation, Whyte, like your basic comic-book villain, decides that Carl would make a good subject for the project. Whyte has one of his many criminal flunkies set off a bomb in Carl's lab, killing Carl-- after which Whyte uses his technology to turn Carl's burned body into a cyborg-soldier. One prominent feature of the cyborg is that it's programmed with a "rage factor," designed to make the cyborg erupt into a killing frenzy-- a facet that certainly seems counter-intuitive if Whyte's real purpose is to turn out cybernetic astronauts

Cyborg-Carl-- never called "The Vindicator" in the film, although some characters do call him "Frankenstein"-- proves so powerful that he breaks free from the institute and goes looking for his wife, initially confused about what's happened to him. After a gratuitous encounter with street-punks demonstrates how mighty Cyborg-Carl has become, Whyte seeks out a commando-for-hire, the aptly-named "Hunter" (Pam Grier, initially seen involved in a kendo duel) to corral the robotic renegade. This becomes the film's main plotline, consisting of Whyte's various gambits with Hunter or with other henchmen to capture or destroy Carl Lehman. But the script makes the various gambits distinct enough that they don't become repetitious, even if Lauren is inevitably placed in the position of "damsel in distress." I particularly liked a stunt in which the cyborg is lured into a trap designed to offset his superhuman strength: a pool full of hardening resin. The likeness to comic books is emphasized by an end-battle between Carl and Whyte, outfitted in a cyborg-suit.

Both the script and Jean-Claude Lord's direction balance the film's focus on incident with a certain number of pathos-moments. That said, basic pathos and action are all the film offers, in marked contrast to the greater ambitiousness on display the next year, in the mega-success ROBOCOP. The Frankenstein references seem out of place, since the Shelley monster was a tabula rasa who's never in touch with any aspect of a previous existence. Carl Lehman bears more resemblance to some of the humans-turned-robots in comic book features such as ROBOTMAN and DEATHLOK, or even (if one substituted vegetable matter for mechanical parts) SWAMP THING. If anything, Whyte is the only character who resembles anything from Shelley, being that he's a scientist so obsessed with his project that he totally divorces himself from all ethical matters.

Posted by Gene Phillips at 2:44 PM
Email ThisBlogThis!Share to TwitterShare to FacebookShare to Pinterest
Labels: combative dramas, the marvelous