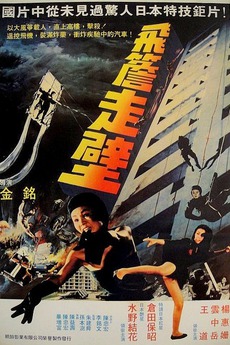 The best ninja-movies are always IMO those that dispense with logic and just indulge in as much extravagant spectacle as possible. This is definitely not an asset shared by THE NINJA AVENGER, aka THE IMPOSSIBLE WOMAN. Since the lady ninja of the title was billed as "Linda Young," I didn't know that the actress was identical with the minor kung-fu diva Elsa Yeung, though I did recognize two other names in the cast: Don Wong and the Japanese Yasuaki Kurata.

AVENGER's bargain-basement gangster-melodrama is barely worth remembering, much less recapitulating. The film opens with establishing that "Marilyn" (Yeung) carries out hits on witnesses prepared to testify against female gang-boss Madame Nancy Chow. According to the movie's fragmented backstory, Marilyn was once just a secretary eight years before meeting the Madame. Marilyn, who nevertheless possessed formidable fighting-skills, attempted to stop a woman's being raped in broad daylight. The rapists get the drop on Marilyn but Madame Chow just happens to come by, and she sends her criminal henchmen to rout the assailants. Then somehow Marilyn becomes a ninja, using such gimmicks as shurikens, poison darts, and even an exploding toy plane to kill off the Madame's enemies. Did Nancy send Marilyn to ninja school for some reason? If so, in the present day Nancy suddenly decides that Marilyn's become a liability, possibly-- though it's never really stated-- because Nancy fears the cops can apprehend the ninja girl and make her talk. So most of the film consists of the ungrateful crime boss sending assassins after her regular assassin-- one of these being the aforementioned Kurata.

There's also a silly romantic subplot, in that Nancy's brother Willy doesn't know she's been supporting them in their comfortable lifestyle with the wages of crime. Willy falls for Marilyn, but doesn't find out what Nancy's doing till nearly the film's end. When Willy gets caught in a fight between Marilyn and an assassin, Willy gets killed, Nancy dies slaying the assassin, and Marilyn survives to get arrested.

There are at least half a dozen watchable if not exciting hand-to-hand fights, which are AVENGER's only asset-- that, and the amusement value that Marilyn troubles to don full ninja gear for her work but can't be bothered to conceal her bloody face!

Posted by Gene Phillips at 3:01 PM
Email ThisBlogThis!Share to TwitterShare to FacebookShare to Pinterest
Labels: diabolical devices (u), outre outfits (u), the uncanny