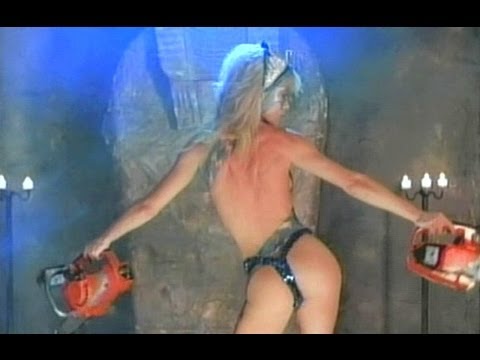 Nine times out of ten, any time a movie looks like the actors had a great time making it, the viewer should probably brace himself for a total bore-fest-- examples being two other films the wunderkind Fred Olen Ray directed in year 1988, THE PHANTOM EMPIRE and WARLORDS.

Nevertheless, the kitsch-titled HOLLYWOOD CHAINSAW HOOKERS probably ranks as Ray's best movie, just for the moxie it demanded to begin with an absurd premise and follow it to its semi-logical conclusion. Seedy and deadpan-ironic detective Jack Chandler (Jay Richardson) gets hired to scour the bowels of modern Los Angeles for a missing girl by the girl's worried mother, only to find that young Samantha (Linnea Quigley) has gotten involved in an ancient Egyptian cult devoted to sacrificing people with their holy chainsaws. Just to make sure no viewer missed that this was a partial spoof of the TEXAS CHAINSAW MASSACRE franchise (of which there had only been two in 1988), Ray cast as the cult's leader Gunnar Hansen, the same fellow who played MASSACRE's main monster Leatherface. On top of that, Ray has scream queens Michelle Bauer and Dawn Wildsmith serve as two of the "chainsaw hookers."

For most of his investigation, Chandler is blissfully unaware that the chainsaw-murders, in which prostitutes carve up their would-be clients, are taking place at all (there doesn't seem to be much news coverage of these bizarre murders for that matter). But as the snarky sleuth trails Samantha to a strip bar, he's taken prisoner by the Chainsaw Hookers, just on general principle. Samantha helps Jack escape, and he learns that her only reason for hanging around the cult is that she has a vague plan to bring all of the killers down for having sacrificed one of Samantha's girlfriends. Jack falls for Samantha and ends up joining her crusade, though he's not much of a fighter. The film's one big combative scene presents what I assume to be cinema's first depiction of "dueling chainsaws," as Samantha battles one of the hookers (Bauer, if I'm not mistaken).

One's enjoyment of the film's goofy, thoroughly profane humor will vary by individual: either you like lines like "you could have knocked me over with a pubic hair" or you don't. There's a bit of a quasi-feminist vibe here as the working girls labor to cut their johns into sausages (never shown in detail, of course), though one might point out that they still take their orders from a man they call "Master." Hansen arguably gives the best performance here. Sometimes he's portentous--  he claims that his cult was given "the chainsaws of the gods" by the god Horus. But other times he sounds like an ordinary cantankerous jerk, particularly when he can't get his chainsaw started to slice Jack into pieces. ("My dad used to get the same look on his face with his chainsaw," quips the detective.) That said, Linnea Quigley helped put the film on the trash-film map with her "virgin dance of the double chainsaws." The actress later claimed not only that she danced with fully running chainsaws, but also that she was completely nude and merely wore strategic paint to conceal certain areas.

Though the Master claims to reign over an ancient cult, there's no evidence that anyone has supernatural powers. The cult-leader apparently puts Samantha under hypnotic control, but he's no Svengali, since the feisty female breaks free and subjects the Master to his own sacrificial blade.

Posted by Gene Phillips at 2:50 PM
Email ThisBlogThis!Share to TwitterShare to FacebookShare to Pinterest
Labels: bizarre crimes and crimefighting (u), combative comedies, diabolical devices (u), enthralling hypnotism and illusionism (u), the uncanny