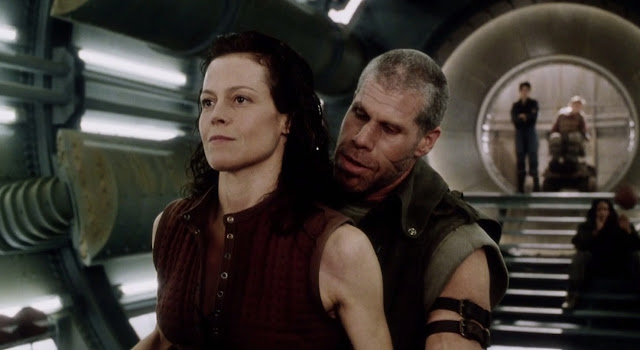 Though ALIEN RESURRECTION was the least successful of the "Ellen Ripley series" at the box office, director Jean-Pierre Jeunet and writer Joss Whedon put together a film far superior to ALIEN 3, albeit nowhere good enough to rate with ALIEN or ALIENS. Though Whedon leaves open the possibility that the reborn Ripley might have gone on to further exploits, the lack of direct cinematic sequels had the effect of giving the tortured heroine a "happy ending" of sorts. To date Weaver has not reprised the role except in a few video games, and RESURRECTION certainly brings her association with the Xenomorphs full circle.

Two hundred years pass following the events of ALIEN 3, in which Ripley and her Alien spawn perished together in a smelting furnace. I'm not sure why Whedon thought that such a long interval was necessary, given that Ripley was already alienated from the Earth-culture into which she was delivered at the onset of ALIENS. Was the interval needed for Earth-people to perfect a form of cloning so radical that it could clone new Aliens from the bio-matter left behind in the foundry? Moreover, for some reason the scientists-- who are still working for the same corporation that menaced Ripley in ALIEN 3-- couldn't separate the genetic material of Ripley from the genetic material of the Xenomorph inside her. This selective expertise results in Clone-Ripley-- who possesses many memories of the dead original-- being a hybrid of a human and an Alien. Thus Clone-Ripley has greater physical strength and an intuitive awareness of the Xenomorphs.

Clone-Ripley receives a deliverance of sorts when a gang of space mercenaries dock their ship with the scientists' own experimental vessel, dropping off a quantity of abducted humans in whom the technicians breed new Aliens. The mercenaries recall the raffish marines of ALIENS, even to the extent of having a synthetic member in their group, Call (Winona Ryder). When the captive Aliens break free and decimate the scientific team, Clone-Ripely convinces the mercenaries to help her destroy the vessel with the Aliens aboard. To further complicate things, the Alien whose genetic info was taken from Ripley's body cells is another Queen, though when the Queen gives birth, she spawns a human-Alien hybrid in whom the Alien aspects are dominant. For reasons I did not follow, this new being does not represent its real mother as its sire, but bonds with Ripley as its maternal unit.

The convolutions of the Alien plot interested me less than Whedon's ability to give a little personality to the mercenaries, which I found as effective as the cannon fodder from the 1979 original. To be sure, there is one dull doll in the group: the aforementioned Call, played listlessly by Winona Ryder. But Ron Perlman and Michael Wincott provide some good moments, particularly the basketball duel between Clone-Ripley and Perlman's character.

Once again, since the Xenomorphs are nearly invulnerable, the plot-thrust once more consists of "get out and blow up the ship behind us." Jeunet's direction is more sensitive to the mythic potential of the Alien franchise, but RESURRECTION never quite brings the potential into the actual. In one scene, Clone-Ripley and her Xenomorph "son" are loosely intertwined, which may remind one of the perverse sexuality seen in the original 1979 film. But this level of resonance is not sustained, and so what we have is just a decent thriller, noteworthy largely for the redemption of Ripley, who's at least able to put the vile E.T.'s behind her and seek a new life.

Posted by Gene Phillips at 1:55 PM
Email ThisBlogThis!Share to TwitterShare to FacebookShare to Pinterest
Labels: combative dramas, the marvelous