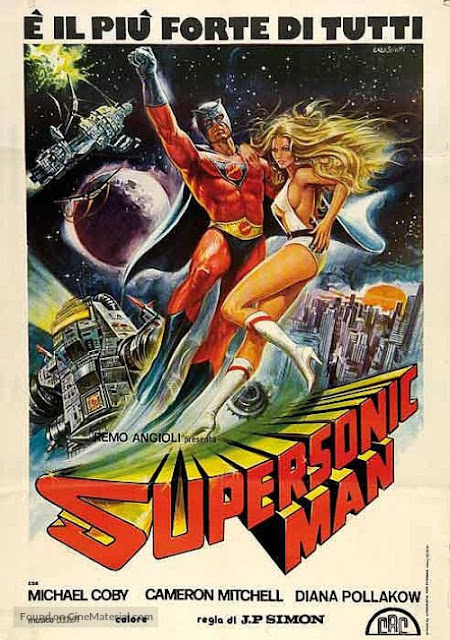 The colorful ad for this ripoff of the 1978 SUPERMAN may be the only good thing to come from this time-waster. That, and noting that once you've seen this clumsy, brain-deadening superhero swipe, you may yearn for the comparative brio of Italy's punchy action-flicks. At least the Italians, unlike the Spaniards who made this turkey, consistently offer good fight-scenes.

Since SUPERSONIC MAN duplicates none of the psychological, sociological or cosmological aspects of the Superman series in both films and comics, all that's left is the metaphysical. The early section of SUPERSONIC establishes that the red-hued superhero is sent to fight evil on Earth by his hyper-advanced people, which is essentially an abbreviated version of the "only begotten son" elements of the Superman mythology. SUPERSONIC of course gets across no mythic resonance whatever, but that's the closest the flick gets to any sort of abstract concept. Oh, yeah, once the hero's "alien" name is said to be Kronos, but nothing about him compares with any of the motifs from the narrative of the Greek Titan.

One amusing touch is that the hero (played by Richard Yesteran) is only called "Supersonic" in the film proper, though no reason is given for the origin of the name. Like Superman, Supersonic has a mortal identity, known only as Paul (Michael Coby), who looks nothing like Supersonic and who apparently has no powers when he's in his mortal form. Others before me have observed that despite his lack of power Paul often charges into trouble and gets beat down, until he can change into Supersonic. Maybe they should have named him "Lois?"

For the span of this happily one-shot film, the great evil faced by the hero is mad scientist Doctor Gulik (a wildly overacting Cameron Mitchell, whose English lines are dubbed by some other voice). Gulik can create many wonders, such as a pokey robot with some vague weapons-systems, but he needs the help of another scientist, Professor Morgan, to synthesize the fuel needed for a death-ray satellite. Gulik's men kidnap Morgan, who refuses to work for the madman. So Gulik also sends henchmen to fetch Morgan's hot daughter Patricia (Diana Polakov)-- and as it happens, Supersonic makes it his business to follow Patricia around foiling her kidnappers, with the clear implication that down the road Paul is going to get some as a reward for the hero's actions.

There are several opportunities for Supersonic to trace the thugs back to their master, particularly since the hero can pull just about any super-ability out of his ass. True, the early Superman sometimes did similar things, though I think even Jerry Siegel would have restrained himself from having his hero change a gun into a banana. There are some amusing sequences to allay the boredom-- Mitchell's bad acting, the clunky robot-- but such scenes are few and far between.

Posted by Gene Phillips at 11:24 AM
Email ThisBlogThis!Share to TwitterShare to FacebookShare to Pinterest
Labels: combative adventures, the marvelous